We have successfully, gone around the horn from Buenos Aires to Valparaiso.  Symphony docked early in Valparaiso.  The port certainly looked dreary from the ship. 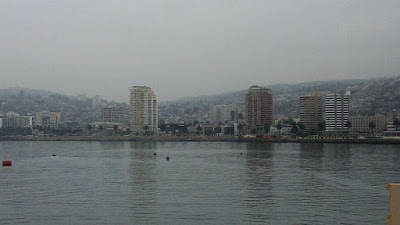 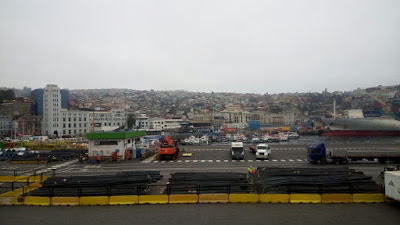 Breakfast was a little more crowded on disembarkation day but we still got seats and the breakfast was its usual high quality.

The disembarkation process went smoothly and we spent little time in immigration.

We have a transfer that will take us from Valparaiso to Santiago.  The ship has set up a space for passengers in the Santiago Hotel, where we will wait until it is time to go to SCL to catch our plane.  That is the plan.

The bus was comfortable and the ride was scenic - we have done it a few times.  The weather improved dramatically from the gloominess of Valparaiso.  Our only rest stop was at a small restaurant adjacent to a llama farm.  We not only got to stretch our legs, get a drink, but also spend some time taking shots of these interesting animals (don't get too close - they spit). 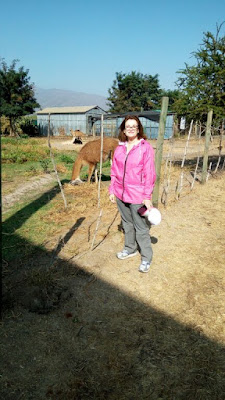 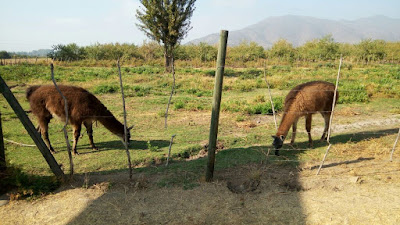 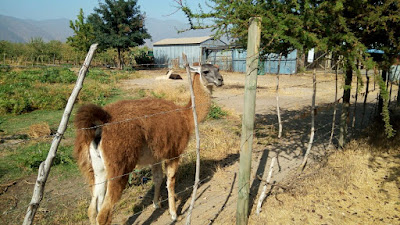 It was a short ride with surprisingly little traffic to the Hotel Santiago.  The Hotel is beautiful with a huge lobby and wonderful views - the pool had a pretty impressive waterfall. 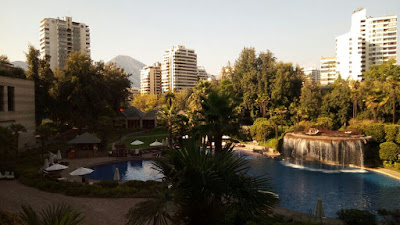 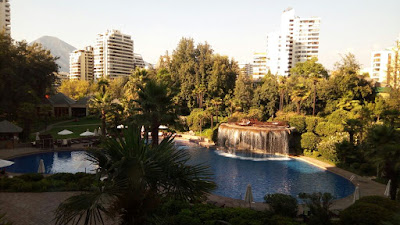 The passengers were assigned to a large ball room with pretty comfortable seats and table.  There was food available but when we asked about vegetarian items, we found out there were none.  The hotel staff worked something out so we could have cheese sandwiches and other non-meat items.  The drinks were fine.

Our flight home is scheduled for 9:53 PM and we will probably not leave for the airport until 6 PM.  We got a little tired of sitting around at the hotel so we decided to walk to the nearby shopping mall only a few blocks away.  The neighborhood we were in was pretty upscale but, even so, we did walk past a McDonalds that could have been in any place in the US.

The mall itself was massive but again looked just like the malls back home.  I couldn't resist taking pictures of the Dunkin Donuts Shop.  It was a small store like the kind you might find in the airport but it had all the items. 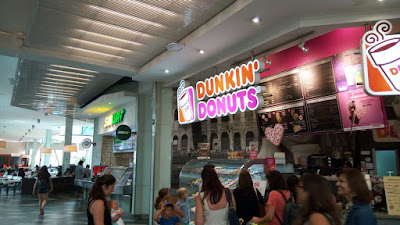 After checking out most of the mall, we went back to the hotel.  Eventually, our flight time window was called and we boarded our bus for SCL.

After spending some time in line for an agent, we were pleased to know that our reservations were fine.  We checked our bags through to Chicago and headed for security.  You don't have to take off your shoes here and I didn't get the impression that the security was as tight as it could be but, in a few minutes, we were at our gate.

We are on AA912 - an 8 and half hour flight to MIA.  The seating area at our gate is comfortable enough but there was still a wait until boarding.  At least, our plane, a 777-ER aircraft, is already at the gate - a good sign.  At about 8:00 PM, it is still light outside - summer here in Chile. 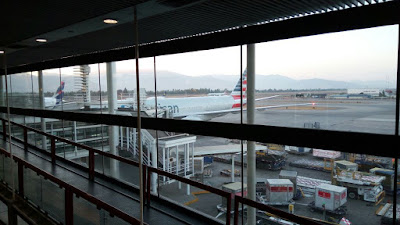 We boarded the plane on time and the process was orderly enough.  We are in special seats, 17A and 17C - Cabin Extra Seats with only two seats - 2/4/2 configuration.  This will help make the long flight more comfortable.

It took a while to board everyone but the plane took off on time.  We are going to be eating our Kosher dinners at about 11:00 PM so getting any sleep after that is a non-starter.  The meals - prepared I guess in Chile - were pretty good (some of kind ground beef in a tomato sauce over rice).

The flight was pretty smooth and arrived in the wee hours the next morning.  We were hungry (the nominal breakfast on the plane was kind of meh) so we did something we rarely do:  We ordered breakfast (I saved up) at one of the airport restaurants.  The pancakes and eggs and cheese omelet were pretty good - especially when you're really hungry.  We had enough time between flights and didn't have to rush our breakfast.

AA1495 was schedule to depart MIA at 6:50 AM so we had a bit of waiting at the gate.  On this flight, an A321, we are sitting aisle across in 9C and 9D (Cabin Extra).  The flight took about three hours and was smooth.

Our bags arrived with us and after a short ride home in a cab, we were home.