NOTE:  The log for this cruise was inadvertently deleted so I am going to share the highlights gleaned from memory.

Fortunately, we do not have to get up at dawn to go to the airport as our flight today, AA156, departs ORD at 10:10 PM.  I always like to give us buffer time so the cab was called for 8:30 AM.  American Taxi did arrive, as they almost always do, on time.  The ride to the airport took the usual 20 minutes or so and we checked our bags at the kiosk.  This was just slightly more complicated since we are flying on two itineraries (Celebrity travel agents set up my flights).  Our trip through security was quick and painless (as long as you remember to put your cell phone in your carryon bag).  The TSA Pre-Check lines were very efficient today.

The next best news to a quick check in is seeing your plane at the gate when you arrive.  Our plane - B737-800 - was indeed there and loading bags and gassing up. 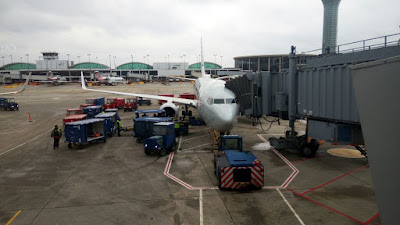 The plane boarded on time - we are in 9C/9D (across the aisle in Cabin Extra Seats (the only way I can fly these days).  We took off on time and the flight was generally smooth. We brought along our breakfast of bagels, lox, and cream cheese and along with the pretty good coffee on American, breakfast was complete.

The plane landed on time in FLL and our bags made the trip with us.  Once we had them, we initiated the drill - walk right out of the baggage claim area to the "Hotel Shuttle" sign, where our van will pick us up for the hotel,  We are staying at our usual place - Quality Inn and Suites, Ft Lauderdale Airport/Cruise Port - on Sterling Avenue.  It was about 80F in Ft. Lauderdale today and a sweaty wait for our van.  It usually takes a number of calls (one from baggage claim, and two from the waiting area) to make the pickup happen.  The wait for the van was about 30 minutes but, in all fairness, getting around the airport and dealing with the thousand other vans, that was not bad.  We loaded up our bags and headed to the hotel.

When we got to the hotel, we noticed something wrong - the lobby was full of customers and the desk folks were running around like crazy.  Turns out that the computer system had gone down and people arriving to check in couldn't.  We sat in the lobby and then in a long line until I could get to an agent.  She apologized and said we could get to our room shortly. She also offered coupons for free drinks at their poolside bar.  We eventually got our room - second floor in the back away from the pool.  We dragged our bags to the room and then collected our free drinks - on the recommendation of a bar customer, I got an artisan ale and Ellen got an artisan Diet Coke.  The ale was OK but I took it to the room for later.

We found out that Danny's folks were in town so we called them and arranged to meet for dinner at The Hummus Factory just down the street.  They volunteered to pick us up and soon we were at the restaurant.  I decided to have the seitan hummus - veggie meat in the middle of a bowl of hummus.  I also tried the veggie soup.  The soup was good but the seitan was a little strange.  Still the food was good and we did have a chance to spend a rare dinner with Danny's parents.  They took us back to the hotel.

I grabbed my ale and we went down to the pool.  It was cooling off now and the pool area at sunset and dark is quite nice.  We did some reading but mostly, I just chilled out on the comfortable lounge chairs. 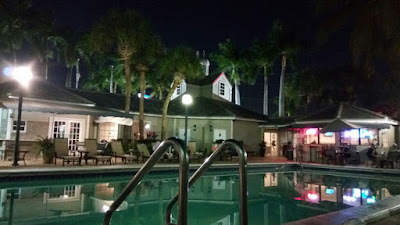 We arranged for a shuttle ride to the pier tomorrow.
The room, which may or not have been spruced up, started off noisy but when bedtime rolled along, all of the chatters were in their rooms and quiet.

Postscript on the room:  I could never find a charge for the room on my credit card even though the deck clerk told me if was paid and gave me a receipt.