The nightmare Presidential Election is over and we are escaping to the Caribbean on the beautiful Azamara Quest.  We are also spending an extra day in Miami Beach to extend the detox process.

To maximize our time in Miami, we are booked on an early flight.  AA1377 has an 8:45 AM Departure so our taxi pickup was scheduled at 7:00 AM.  Our cab arrived right on time and the ride to the airport was short and traffic-free.

We checked our bags and got into the TSA Pre-Check line.  On this day, the Pre-Check line was pretty crowded – seems that either people have caught on to the advantages of expedited screening or it was just a busy morning.  The line moved fairly quickly and the screening was just as it should be (no removal of shoes or laptops or jackets and a quick step through the magnetometer). We were soon on our way to gate H16.

Our plane arrived just a few after we did and our boarding was still scheduled for 8:15 AM. 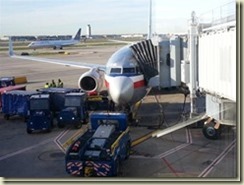 AA1377 – Turning Around for Our Flight

Yesterday morning, when I was checking in for this flight, I noticed that Cabin Extra seats 7D and 7E (bulkhead) were now free.  I changed our seats (sardine seats in the middle of the plane) so maybe we could stretch out and be comfortable.  Done.

We boarded our 737-800 on time and pushed on time.  We almost got lucky as it looked like the window seat might be unoccupied.  Believe it or not, the last passenger to board took the window seat – he was small so Ellen did not feel cramped in her seat.

While the seats were comfortable, the flight was not – about 40 minutes into the flight, we encountered some CAT (Clear Air Turbulence) caused, according to the pilot, by wind shear coming from a nearby weather system.  The attendants were ordered back into their jump seats and the serving carts were secured.  And that’s the way it was for about two hours.  In a moment of calm (I am beginning to have a feel for when the air will be briefly smooth), I hustled (while the seat belt sign was still on) to the washroom.  I survived my adventure.

About an hour out of Miami, I could feel the plane climb to try to get out of the chop – the air did smooth out a bit and finally the light went out.  Drinks and a snack were finally served.

The rest of the flight was smooth and our approach over the Everglades was scenic.  We touched down on time at 12:27 PM.

We are staying at the Riviere South Beach Hotel on Collins Avenue.  The hotel does have a free shuttle but it only runs four time a day and we had missed it (12:30 PM pick up time).  Ellen thought we should double check on the shuttle so she called the hotel and they indicated the shuttle would pick up at Level 2 Gate G17.  We were able to get our bags right away and started our run to G17 while communicating with the hotel and also the shuttle driver.  We got there (about a half mile) but no shuttle.  The hotel could not be reached and when we did get them, they were impossible to understand and/or hung up. Que?

An official looking gentlemen (he was arranging limo rides) said he would call us a taxi to take us to the hotel.  It look a while but eventually, the taxi came, we gave him the name of the hotel, and the fare was $35.  The cab had no markings or meters so I figured this was a non-Uber civilian taxi (there were lots of Uber and Lyft cars roaming the airport).  The driver was nice so we didn’t think we were part of a kidnapping plot.

The ride to Miami Beach didn’t take long but the traffic at street level was heavy – in part due to a lot of construction of both streets and buildings.  He pulled up to a hotel – Riviera South Beach Hotel.  While the names were similar, our hotel was on Collins Avenue (the main drag) and this place was on a side street.  I asked him use his GPS to find the Riviere Hotel, which turned out to be just a few blocks away.  We eventually paid him $42 for participating in our adventure.

We checked in and I was about to share my “thoughts” on the shuttle fiasco when the clerk said no one had called him.  Apparently, we had been in contact with the faux hotel (“Riviera”).  The clerk spoke perfect English and was very professional so I knew he wasn’t the guy on the phone.

The place had no elevator so the clerk carried our bags up one flight to Room 304 – supposedly a quiet room away from the noise of Collins Avenue. 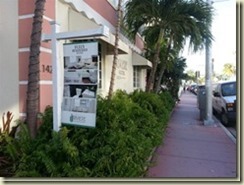 The hotel advertised that all of its room had been renovated and Room 304 did look spruced up.  It was a huge room with two Queen beds and a separate kitchenette.  It also had an in-room safe.  The bathroom was also renovated but the toilet looked original and the shower had no light.  Still a very nice room. 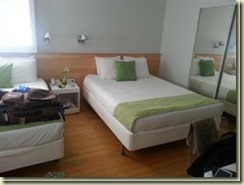 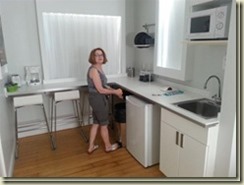 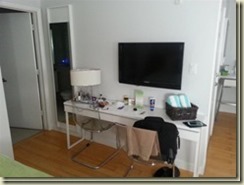 The hotel had a very interesting patio area surrounded by lots of tropical foliage.  There are also lizards and squirrels populating the patio area.  There are table and chairs here that are used for tenants to smoke (the rooms are smoke-free) and hang out. 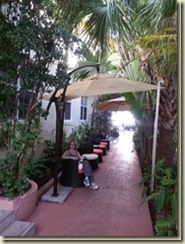 Ellen in the Patio

We have dinner plans with Jennifer, who I work with to book my cruise gigs.  I have been working with Jennifer for about four years but this is the first time, we have had an opportunity to actually meet face to face.  We are going to meet at Il Bolognese, a northern Italian restaurant on Ocean Drive literally around the corner from our hotel.

While waiting for Jennifer, we took another horrible selfie.  I have figured out why the face-forward camera is blurry – when the phone screen was recently fixed, the tech must have gotten some greasy stuff on the camera.  He then sealed up the phone and I’m stuck with a vaseline-look selfie camera. 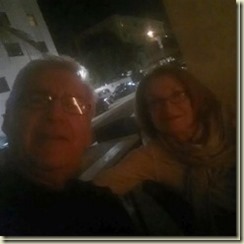 Our dinner with Jennifer was great – lots of fun conversation and absolutely terrific food (I had the Cannelloni and a Cesar Salad; Ellen had the mushroom ravioli.  My food was wonderful perhaps the best Cannelloni I’ve ever had).

After dinner, Ellen and I walked along iconic Ocean Drive.  As always, the place was hopping. 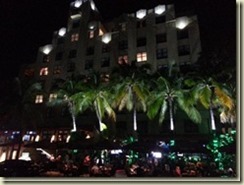 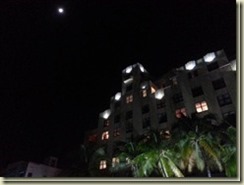 Ocean Drive and Moon Over Miami

It had been a very long day so we went back to the hotel.  Unfortunately, the hotel is not that quiet – we can hear our   neighbors.  Hopefully, they need sleep like the rest of us and things will get quiet a little later on.  If the AC (which is new) weren’t so loud, we could run it as background noise.  Luckily, one of our windows has a screen so we can get some fresh air into the room.

Lights out about 11 PM.  Hoping for a quiet night.