I was at the Oceanview Café when it opened and had my usual breakfast.  A dreary morining with storms in the area.  Just rain - not chop. 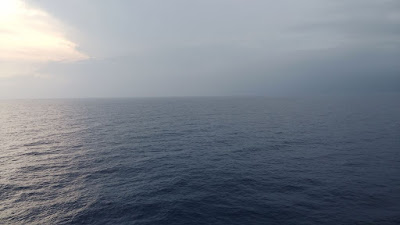 Set up was quick with no issues.  The image is not as sharp on the screen as it is projected.  And I cannot wander around the stage because the projector is literally blinding – I have to stand over to one side when speaking.  The turnout was OK and the talk went well even though I did stumble over some words. 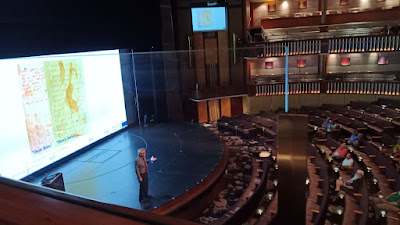 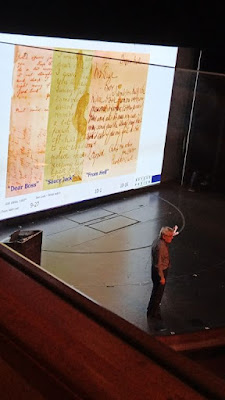 I changed my clothes and went to the Rendezvous Lounge for my Q and A.  The Q and A, which was a last minute thing that I wasn't sure was actually going to take place, turned out to be the most fun time (enrichment related) of the cruise for me – the passengers (about 30 of them) had some very interesting questions and comments.  I also gave them some more information on the OJ case.  It was just a terrific 45 minutes (it ran over by 15 minutes).

We had lunch in the Café and I found some Asian items on the line that were really good.  The stir fried vegetables along with the fried rice was tasty and great.  No pizza today.

The rest of the day was spent in the Solarium.  I finished “The Drifter” and liked it so much that I will be looking for the second book in the Peter Ash series when I get home.

We had dinner tonight with Gary – we ate on the back deck – I had another pasta prepared for me (combo of marinara and spinach cream sauce – not as good as with Alfredo).  The conversation with Gary was pleasant but we headed to the Theater for tonight’s Showtime.

The headliner tonight was Brazilian Singer, Camila Andrade, who sang both in Portuguese and English.  She was a little hard to understand because of her accent but she sang and moved on the stage like the pro she is.  I enjoyed her show (she was not too loud).  The crowd was small.  Before her performance, Mike did “Mr. Bojangles” accompanied by one of the more flexible male dancers.  Mike did a find job. 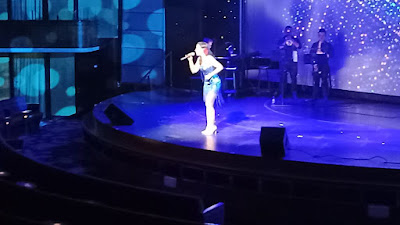 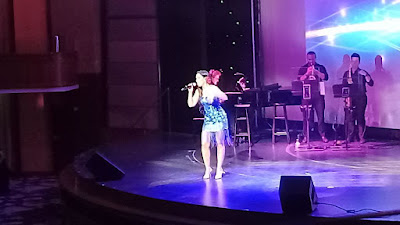 After the show, we went back to the room to pack.

Ellen did her usual magic and the suitcases were in the hall by 10:00 P.M.