Another beautiful morning – up early and breakfast at the Oceanview Café. I just never get tired of this breakfast because the food has been good and the views priceless, especially the sunrise. 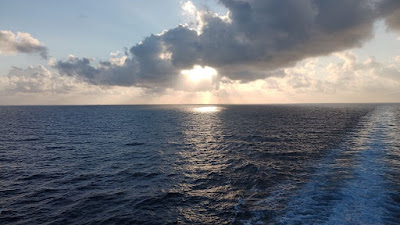 At 10:00 AM, I went to the Celebrity Theater to hear Gary talk about what went wrong with the OJ Simpson case.  He had an extremely good turnout – who doesn’t want to hear what really went on with the OJ case.  I was disappointed to not find out anything new about the case.  In addition, Gary spent a lot of time showing films of OJ running (both at USC and at Buffalo).  That simply filled time and didn’t help with understanding the case.  He also had photos from the court proceeding including those of the attorneys.  I was hoping for forensics that I was not aware of.

At 11:00AM, Gary had a Q and A session in the Rendezvous Lounge that I attended.  I was hoping to find out more information on the OJ Case but the questions did not get into that too much.  Just a lot of general chat.  Gary did have a good turnout and OJ was quite a running back.

After our usual lunch in the Oceanview Café, I got ready for my next talk – “Forensic Detectives: Identifying the Famous and Infamous” at 2:30 PM in the Reflections Lounge.

I had a very nice turnout and the audience was with me all the way.  I like the Reflections Lounge because it allows for better interaction with the audience. 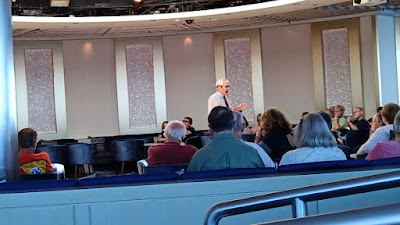 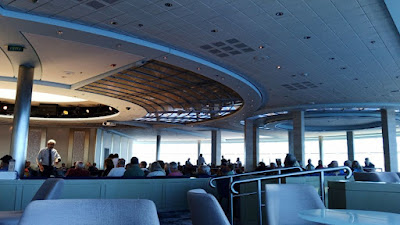 After the talk, we found two loungers in the Solarium.  I decided to share a picture of the statue of the woman at the far end of the pool.  She may have forgotten her suit but she looks like she is having fun and certainly her share of food.  I found out later that there is an identical statue in one of the countries we have visited - perhaps Colombia. 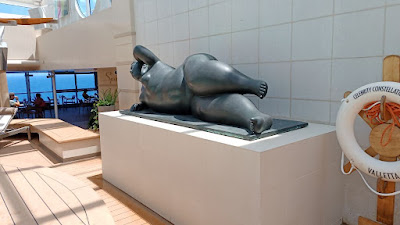 We stayed in the Solarium until dinner time – I had the pasta chef make me Pasta a Oglio again but it was not quite a good as the last time – it needed a bit more oil.  It was OK.  The pasta station on Constellation is the best option for me on this ship.  Always fresh and tasty.  The sunset on Deck 10 was a bonus. 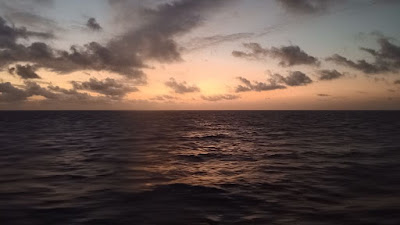 Showtime tonight was the Production Show, “Soundtrack”.  It was billed as music from the movies but only a few songs were recognizable.  We had seen this show years ago and only “Over the Rainbow” and “Singing in the Rain” were familiar.  The singers really belted out their numbers but the decibel level was bearable.  I think the show needs more standard movie songs – I’ve seen a lot of movies and I had no idea was 80 percent of the songs were. 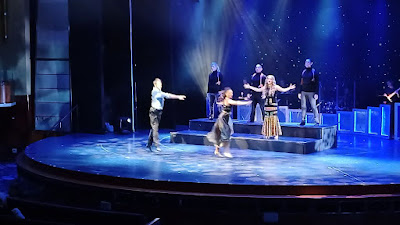 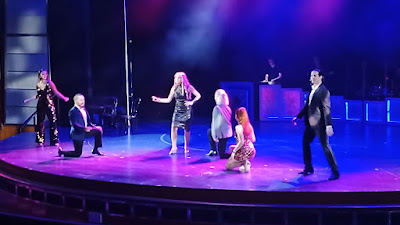 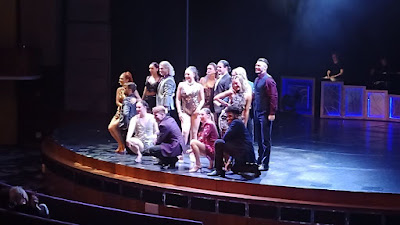 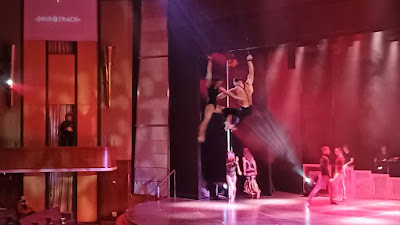 Adding to the show were the acrobatic specialty dancers, who swung around the theater during some of the numbers (above).

We hustled from the Theater to the Rendezvous Lounge to hear a jam session with Roy Tan and some of the other entertainers on board.  Roy accompanied Bailamos in “I’m Feeling Good”, the tall Diva on “I Can’t Make You Love Me if You Don’t”, Ruby (Diva) on “Total Eclipse of the Heart”, and one of the Bailamos Guys on “Bring Him Home”.  The jam session was fun and entertaining. 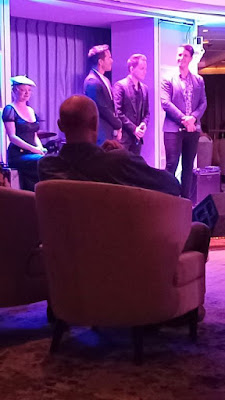 Found out I am in the Theater tomorrow morning, so back to the room.