A beautiful day in Athens - the temperature is mild and not nearly as warm on our previous trips here. 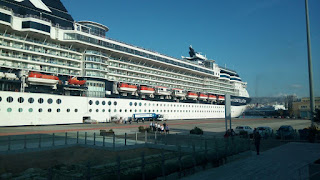 We opted not to climb the Acropolis – most of the ship’s tours involved the Acropolis.  Instead, we would walk around the area of the Acropolis and the nearby Plaka. We have been here a number of times but have never visited the Plaka - clearly a planning oversight.  After a relaxing breakfast, we got some good information from the guest services agent about getting around the area.

Just off the ship there is a bus stop for the bus to Central Athens.  We bought round trip tickets to the city center for 4.5 Euros/pp round trip.  We were told that the drop off was at the entrance to the Acropolis and the Plaka.

The bus trip took us out of the Port – we were in Terminal C, which looked to the furthermost terminal in the complex.  Once out of the Port, the bus route passed through Piraeus and some very nice areas such as the marina (where we had dinner on a previous stay).  After getting through the town, the bus got on the expressway to Athens.  The bus ride – port to drop off – took about 30 – 40 minutes and worth the money.

We were dropped off across the street from the main garden and just around the corner from the street that borders the Acropolis Complex.  It was not a tough walk up to a point when you could take pictures of the Parthenon and other structures at the top.  Looking up at the Acropolis, the decision not to climb up the hill looked like a very wise one. 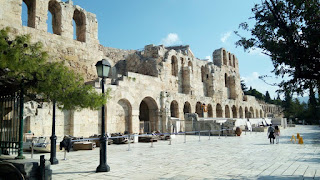 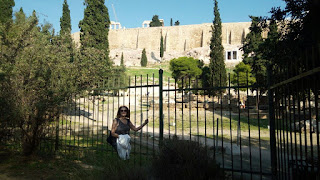 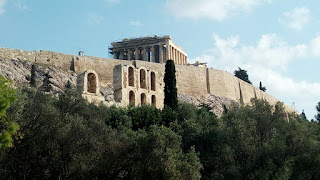 Our next destination was the multi-square block shopping area known as the Plaka.  It is part of the old city and is wall to wall shops and restaurants.  We stopped at what could have been a main square for a photo op. 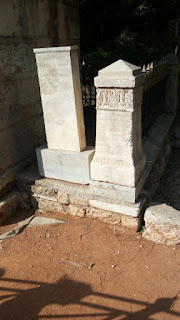 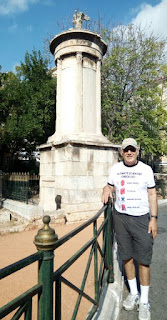 We looked for pins and other items and basically crisscrossed the entire Plaka. 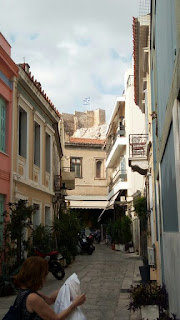 We don't usually eat off ship but lunch time was approaching and I was getting hungry.  Going back to the ship now would cut our visit to the city short and would really be a waste of good bus fare.

After checking out several options, opted to have lunch at Café Venetto at the Plaka.  Ellen wasn’t hungry but I decided to order the Greek Pizza (sold by the Kg) – 3.4 Euros plus Iced Mocha Latte – 2.5 Euros – a bargain and really good (except for the occasional olive pit fragment in the pizza).

After lunch, we hit a few more shops before walking the short distance to the bus stop.  I couldn't resist taking the picture below (a display put out by one of the shops). 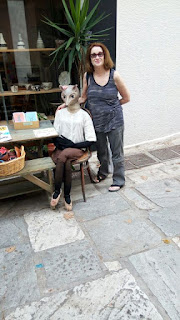 After putting in quite a few steps, we made our way back to the bus pick up point.  There were a few people waiting for the Pier Bus and somebody said it just left (the bus runs every 30 – 40 minutes).  Bus after bus ran by until our bus finally came around the corner.  We were back on the ship by 4:00 PM.

The sail away was very picturesque - I was able to capture some of Athens in the gloaming. 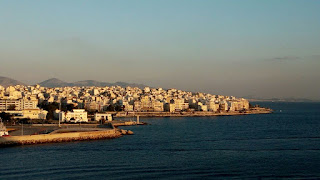 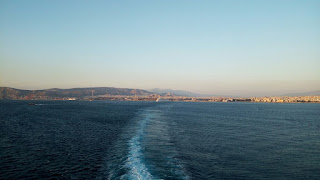 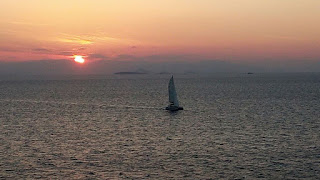 Jayne Curry is on board (we ran into her near our cabin earlier) and her main show is tonight at 7:30 PM.  The theater was pretty full and her show, which we hadn’t seen for five years, was excellent.  I don’t recall the details of her earlier shows but this evening she combined quite a bit of conversation, storytelling, and humor with show stopping songs.  She did “The Rose” and finished up with Celine Dion’s, “All By Myself”, and included a few of Celine’s moves.  Besides “The Rose”, my favorite number was “I Am What I Am”.  The audience loved her and gave her a standing ovation. 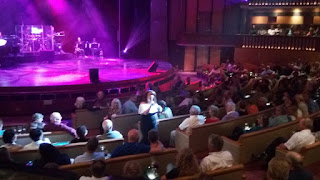 When we got to our room, we heard a loud, grinding thumping noise that vibrated the whole cabin.  I thought it was the engines.  The noise went on (with a few seconds of quiet) until 2 AM (3 AM real time).  I called Guest Relations at 2AM and confirmed that the noise was a Crew Party.  We found out later that the party was moved from Reflections to just underneath us due to a scheduling issue.  Sam, the Entertainment Manager, told us there would be no more parties to keep us up all night.  We are going to tired tomorrow.

Clocks move back one hour tonight.