A totally beautiful day at sea. 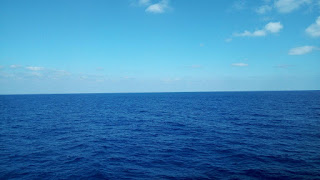 The scheduling for today allowed me to have a nice breakfast in the Oceanview Cafe.  My third talk, “Extreme Forensics: Non Human DNA Testing” was scheduled at a more favorable time, 11:15 AM.  This resulted in a bigger turnout – maybe 200 people.  The audience was engaged and attentive.

A morning talk, means an afternoon of reading, relaxing, and involuntary napping.  Constellation has nice open decks for just that purpose.

Ellen is working on a needlepoint and have found the ideal spot for doing so. 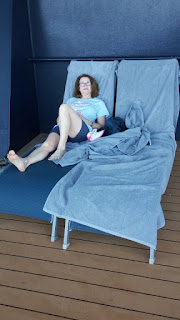 I downloaded a couple of Kindle books for this trip.   I found these books on Facebook (Amazon ad) so I thought I would give them a try.

“Noble Beginning” is part of a series by L T Ryan.  Jack Noble is based on Jack Reacher – the writing is OK but the book is short and the action not as riveting and bone crushing as the Reacher novels.  Still it was OK.

The other book is a series by Iain Rob Wright about an ex-military woman, Sharon Stone, recruited into a top secret organization fighting terrorism.  Sharon Stone is full of angst – she was disfigured by an IED in Afghanistan and her wound made worse during torture by some terrorists.  So she has skills, a cutting style, and a grudge against terrorists.  The title is “Soft Target”.  I'm in the middle of it now.

Dinners are pretty much in the Oceanview Café – the salad bar is pretty good (always have garbanzos) (thousand island dressing is the best dressing).  If you catch the cheese pizza fresh out of the oven, it is really good.  Also, the views are good – sometimes, it is warm enough to eat on the back deck.