Our cabbie showed up on time – the cab was comfortable and the driver courteous – and about 45 minutes later we were checking in at Heathrow’s Terminal 3.  The lines were short for both check-in and security and we settled in in one of the lounges to await the posting of our gate.  The lounge had both UK and EU charge units available for our Kindle and Computer.

Gate 40 – revealed at 11:40 AM - was at the other end of the Terminal so it took us about 10 minutes to get there.  Once in the gate area you can’t leave without rechecking in with gate security personnel.  Heathrow uses the Q&A system (have you packed your own bags? etc.).

I was told by a security agent that I couldn’t take a picture of the aircraft.  Fortunately, I had taken a picture of AA47 when I first got into the lounge. 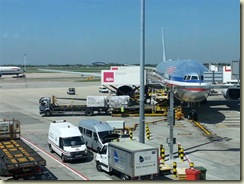 We have exit rows seats – 31HJ – on this B777-200 aircraft, which is flying about 75 percent full.  The seats are comfortable and not priced any differently than other seats.  Are you listening, UAL?

My first shot from the window was when we cleared 10,000 feet and electronic devices were allowed. 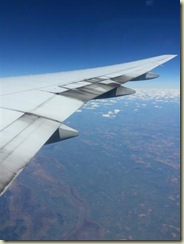 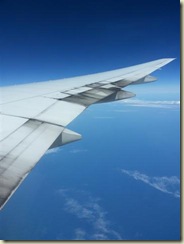 Over the Celtic Sea

It was a very smooth flight so I spent nearly the entire flight completing this travel blog.

We had ordered Kosher Meals but they were not on the plane – instead we had spinach and mushroom lasagna, which was very good, and a small salad.  The food was very good and we were told by the flight attendant that AA had change its food menu last week.  A change for the better.

While we crossed the ocean, we snacked on some of the baked goods we purchased in London…very tasty.

The shot of snowy Newfoundland indicated another smooth crossing of the pond. 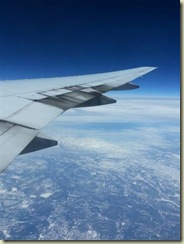 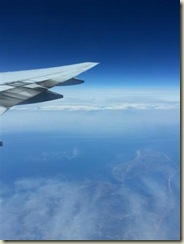 I was also able to shoot the contrail of another aircraft in the distance – probably not visible in the photo below. 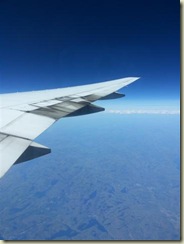 Contrail in the distance

Tried to listen to my Spenser Audio Book but dozed off and missed a few chapters – wonder if it matters.

As we got closer to Chicago, we were served our snack – mini-deep dish pizza, grapes, and shortbread cookie.  Totally great and I don’t know they got the crust so crisp.  Kudos to the new menu.

The Eastern Shore of Lake Michigan was a welcome sight. 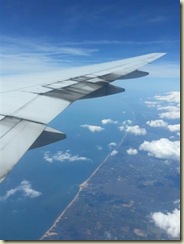 We landed about 15 minutes late.  The bags showed up pretty quickly.  Immigration took a bit longer than in the past but it was still OK.  I was so jetlagged that I couldn’t remember the cruise line we had been on.  The agent let me back in the US anyway.

We were happy to get a ride from the airport and even happier that it included a stop for dinner.

In spite of the uncooperative seas, this was a very enjoyable and successful cruise.