Our flight today on United Airlines (UAL 970) is at an unusual time – 3:50 PM – so I scheduled our taxi at 1:30 PM.  The cab came right on time (he texted that he was here) and because we had no traffic, we were at the airport before 2:00 PM.  We checked in at the kiosk (very fast) and zipped through TSA Pre-Check.  We crossed over to Concourse C to our gate C11.  Our plane was not there yet even though the United App said that the plane arrived from AMS some hours ago.  The plane was in a hangar near the International Terminal.  At about 3:00 PM, our plane was towed in to our gate – amazing that the little tow truck can lug such a huge plane – a 767-300 – so easily. 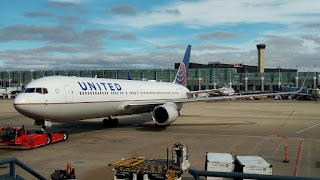 Even though the plane arrived just a little late, boarding took place on time and went very smoothly – we were in Priority Group 2, which got us on the plane early enough to score an overhead bin.  Because UAL charges so much for its extra-legroom seats, I didn’t get any of those (besides they were all sold out).  Instead we are in 39K and 39L – three rows from the back of the plane on the starboard side.  Although the seats are in the rear of the aircraft, they are far enough away from the lavatories to avoid the gathering problem.  Also, these rows only have two seats and not three across (something I will need to remembeer the next time we fly one of these models).

The plane must have been a newer aircraft - it looked fresh and the wings had huge winglets (maybe on later versions or aircraft).  Our seats were new and comfortable and roomier than I expected (I was able to cross my legs with minimal efforts – my test for roominess).  On UAL, you can watch movies on your tablets and phones but the screen on the seat back is so good that, along with good headphones, the viewing is perfect.

Departure was pretty much on time and the climbout through the broken clouds was smooth. 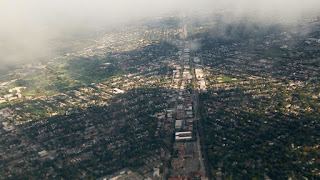 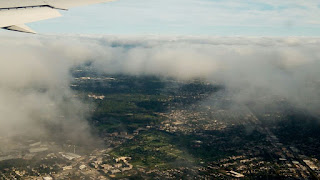 Our kosher meals were delicious – meatballs on pasta with some kind of tomato sauce.  One of the best meals we’ve had in a long time.  Gone was the inedible cole slaw and in its place was a garbanzo bean salad that was OK.  Some kind of pudding finished off the meal.

After checking out the options available on in-house entertainment, I watched “Jurassic World – Lost Kingdom” (same old, same old), “Annihilation” (boring and confusing especially the crazy ending), and “Justice League” again (I still liked it even though I fast forwarded through the slower parts).

The flight over the Atlantic was pretty smooth with only one period of rock and roll – I tried to watch movies or read but the screen kept moving on me so I quit and just rode it out.

We were flying into the Sunrise and over France you could just see the first few minutes of dawn. 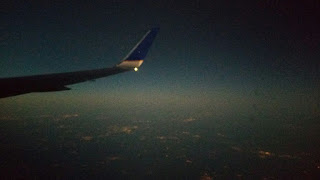 About an hour out, the flight attendants served breakfast – in addition to our usually strange kosher snack, we also managed two regular meals (yogurt and croissant).  The coffee was really good.  At this point, we were over the coast of Italy. 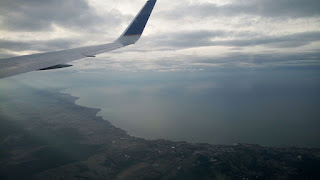 The approach to FCO was nice and smooth. 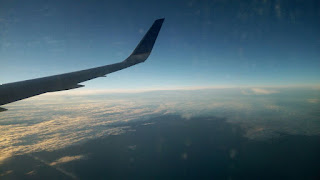 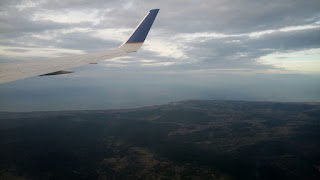 After touching down, the pilot told us that we were assigned a remote gate – a "technical term" for no gate but a tarmac direct exit (like we last did in Rekjavik).  Again, I like the tarmac exits (as long as the weather is OK). 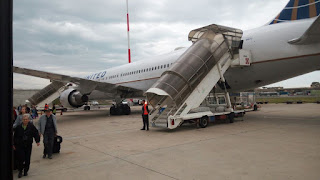 We deplaned and boarded buses that took us to the terminal.  The ride was short and the passport control process was quick – FCO now has a semi-automated system.  You scan your passport at a kiosk and have your picture taken.  By the time you actually see an agent, you’ve been run through their databases.  It seemed to make the process go faster.

Our bags came out quickly and after a little wandering around, we located the train terminal.  We bought two tickets to Civitavecchia (11 Euros/pp).  We found our train track (and used the lifts when available) – validated our tickets and, after not being sure of the train, hopped on.  It was seven stops to the transfer point, Trastevere, and this time we used the lifts to get to the other side.  We waited about 30 minutes for the train and about an hour later, we arrived at the end of the line in Civitavecchia.

After checking around, we found a bus that would take us within a few meters of the Hotel Traghetto – the fare was 10 Euros for both of us (much less than a cab).
We basically walked across the street to the hotel and checked in (because we were repeat customers, the clerk eventually gave us a 20 percent discount on our room rate, taking it down to 100 Euros per night (including breakfast).  The staff has always been very nice here.

The lift is tiny - just big enough to hold two people and their bags - we took it to the third "piano" (ground floor is "0") to Room 202.  I'm sure we stayed in this room before - it has a nice view of the greenery across the street.  This hotel has a history of being quiet and we are hoping the tradition continues. 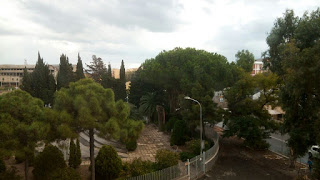 After the inevitable short nap in the room, we took a short walk around Civitavecchia.  The town had changed a bit since our last visit – for one thing, there used to be two nice Spas within a few blocks of the hotel – they were now gone.  The clerk tried to find us a decent spa in the area for a de-jet lag massage but found only one back to back appointment later in the afternoon.  We passed.

The pedestrian walkway that goes down the hill from our hotel to the main part of town was decked out with a number of interesting installations - a blue egg with a bird on top and a bunch of pencils. 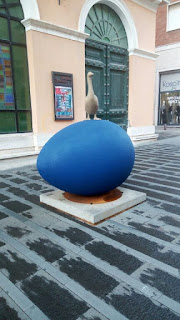 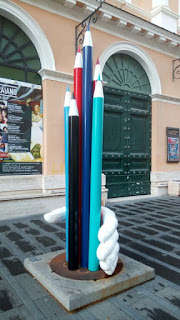 For dinner, we chose a restaurant – Ristorante Da Vitale - on the main drag across the street from the beach.  We ordered a Pizza Margherita (8 Euros) and a large local beer on tap (4 Euros) – total 13 Euros.  It was enough food for both of us and pretty good.  We ate outside so it was a great people watching opportunity.  A very nice first evening in Italy.

We managed to stay up until past 10 PM.