The weather is quite a bit different since the beginning of our double cruise – the heat wave is over and temps are back in the mid 70s - low humidity and comfortable.

Disembarkation. Breakfast up in the Oceanview Cafe was not chaotic and we had a nice relaxing breakfast before having to vacate our room.  Even though the ship still had over 2000 passengers on board, the disembarkation went pretty smoothly – immigration in Amsterdam was a breeze (almost too easy) and we found our bags right away in the terminal.

Our hotel, Hyatt Place Amsterdam Airport, is a new (looks new anyway) hotel but is located in an industrial area without any restaurants or shops within walking distance.  We did have some food taken from the ship but I sprinted across the busy six lane highway to a gas station to pick up some snacks and drinks for our stay.  For dinner, we ate in the very nice hotel restaurant.  The buffet had nice salads and I ordered some pasta as a main dish.  The food was good and the chef worked with us to find items that were vegetarian (e.g. one of the soups).

Our return flights today are on Icelandair – our first time on this airline.  We are scheduled on Icelandair 509 departing at 2:00 PM and connecting through Reykjavik on Flight 550 to Chicago.

Schiphol International Airport is a very compact airport – Just four terminals.  Our flight today is out of Terminal 1.  Icelandair is in Bay 1 at the far end of Terminal 1.  We got into a very long serpentine line but it seemed to move very quickly.  I had checked in on line but we had bags to check (I didn’t notice any working self-serve kiosks).  The check-in process didn’t take long and then we proceeded through security.  Security is very interesting – a TSA type person asks you questions about liquids as you are putting your things on a carousel, which then goes through the scanner.  I answered all the questions twice, went through the soft whole body x-ray and pat down.  I noticed that my carry-on bag was being held by a TSA girl (yes, young girl).  She asked me if that was mine and I said yes – she said she had to go through it because it had a lot of electronics.  I may have been confused but my guy did not ask me to take out my laptop and electronics.  In any event, she went through my bag and re-x-rayed everything.  She even asked me if I wanted her to repack my bag – clearly Schiphol security and O’Hare security are in two different universes.  I said I could do it and we were on our way to our gate.

As we made our way there, I noticed that, at the KLM terminal, there was a plane on the roof.  It was some kind of installation - how did they get the plane up there? 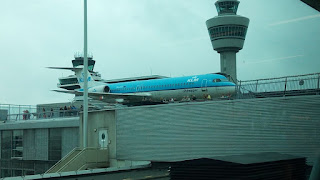 I guess everyone can tell where to catch their KLM flight.  I don't recall seeing this plane the last time we were here.

When we got to Gate 60, we were told that we had to check the monitors to see when our gate was open (a la Heathrow).  But, in this case, at least we knew our assigned gate.

In a short while, the gate was open and we went down to Gate 60 to board Icelandair 501 – there were a lot of people waiting there and no seats.  Some people sat on the floor and the rest of us stood.  The plane had arrived 10 minutes late and we had to wait while it was being turned around. 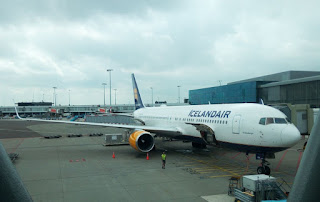 Eventually, we started boarding Icelandair 509 – by groups of rows from the back.  That does make sense in that people would not have crawl over people to get to their seats.  We were the last group to board; I had scored bulk head seats – 6G, 6F – on the B767-300 (2-3-2) – and I don’t believe I paid any premium for them.

The seats were leather and very comfortable – the entertainment system worked well.  The service was good – lots of flight attendants – but the only free drinks you could get were water or soft drinks.  There were no pretzels.

The flight was very smooth and the landing at Reykjavik was amazing – all of that lava and the airport stuck out in the middle of nowhere. 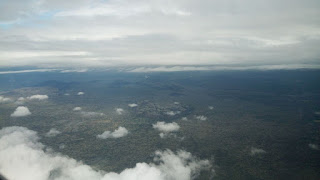 There was no jetway; we walked down a set of stairs to a waiting bus that took on the tarmac to the terminal. I was so close to the planes and being on the tarmac was the highlight of the flight so 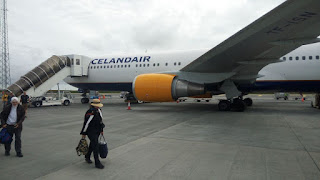 We only had about an hour between flights – I bought a tuna sandwich to go ($10.40) from a cafe in the terminal to have for dinner (along with some chips).  We went through Passport Control and found our new gate – 22B.  Icelandair 550 was already there. 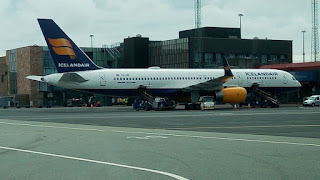 Passengers did not go from jetway to the plane.  Instead, we passed through a tube to get to the tarmac and then up the stairs into the plane.  The boarding here was chaotic – no boarding by rows so getting everyone stuff into the overheads was a pain- the flight attendants did a great job of getting everything up there.  Again, I got to see the plane up close.  There were personnel guarding the aircraft. 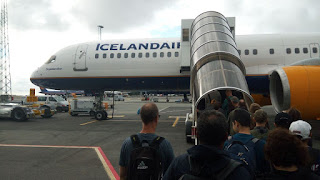 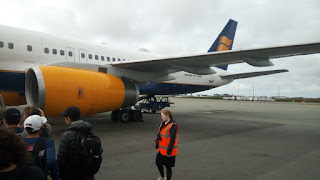 This plane was a B757-200 – I hadn’t flown one of these in a while but this plane also looked in pretty good shape.  We were in the exit row (again, I don’t recall paying for these) across the aisle from each other.  The seats were again comfortable – even though this was a 6 hr 30 minute flight (I didn't know the B757 had that kind of range), there were no pretzels.  You could buy food on both flights and some people did.

The first half of the flight (over Greenland and far northern Canada) was smooth (I watched “Man of Steel” again on the very good entertainment system), the second half was nothing but CAT – the plane was shaking until we arrived near Chicago.  There was a 10 minute break where everyone made a dash to the washrooms.  I fully expected the pilot to request - or least attempt - a new and smoother altitude but he maintained the same altitude for the entire shaky flight.  He came on and reminded everyone to buckle up and stay in their seats (never a good sign).  I took a chance, when I sensed a lull, to dash for the loo and I made it back to my seat OK.
When the plane was about 30 minutes from ORD, the pilot descended about 2000 feet and the air was suddenly smooth - too bad he couldn't do that earlier in the flight.  Also interesting were the announcements:  the Icelandic language announcement took three times as long as the English version.

We touched down on time and after, a little delay, we got our bags.

Soon, we were home.

A very educational set of cruises.  I would do this cruise combo again.