Another quiet night and a better night's sleep.

After breakfast - the same as yesterday but still pretty good, we checked out of the hotel – the hotel manager had told us earlier that, as returning guests, we would be able to get a special discount.  Our rooms came to 90 Euros/night instead of the 120 original per day rate.  That paid for the two dinners.  I guess we will be staying here the next time we are in Civitavecchia.

Getting to the ship was very easy compared to previous trips.  Instead of pulling our bags down the stairs to the entrance of the pier to catch the bus, we simply crossed the street by the hotel.  A new bus stop with seats and shade had been constructed.  The pier buses – all labeled with the ship name – came and went on a timely basis.  We found the one going to our ship – the wait on the bus was short - a good thing because it was hot - and we departed for the berth.  The bus always gives us a look at the other ships docked.  We were at the Celebrity Constellation "terminal" (actually a large tent) in about five minutes.

We had a cabin number so we checked our bags and headed inside.  After explaining who we were, we checked in with the pier coordinator and. in just a few minutes, we had our sea pass card and headed for the ship.

We had lunch in the Ocean View Café – the usual (salad and pizza) – and I snapped a picture of the other ships joining us today at Civitavecchia. 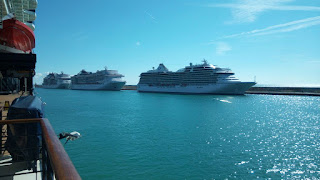 After lunch, we dropped our stuff off in Cabin 2357 (fourth cabin behind the door starboard aft). 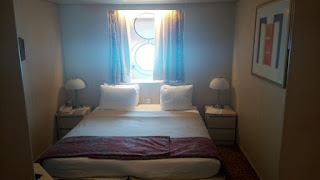 The room is pretty nice with two real night stands.  The bathroom is “cavernous” for a cruise ship.  What is missing is a couch and table to set stuff on.  We met our room steward, Mary Rose, who is friendly and nice.  I think she will take good care of us on this cruise.

We next visited with the Shorex people and were told that the Constellation does not utilize tour escorts - a disappointment but something we will work around.

The lifeboat drill was held at 4:30 PM in the Rendezvous Lounge – Deck 4 (the boat deck).  We were not subjected to the "007" safety film shown on the larger ships.

Based on a letter in my cabin, I met with Sam (Samantha) Kelly (very nice Brit) – Activity Manager - in her office (the other side of Deck 4 behind the door) to go over the talks.  She indicated that all five talks would be in the morning in the theater.

At 6:00 PM, I filmed an interview with Cruise Director, Paul Baya in the back of the theater.  Paul seemed satisfied with the interview even though I always think I sound like a confused person. 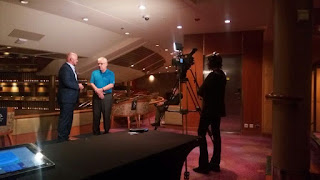 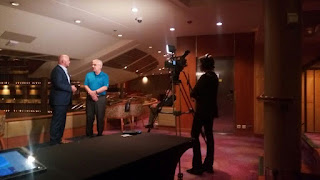 Since I was already dressed for dinner, we ate in the San Marco Dining Room (I had signed us up for "Celebrity Select Dining") - we got a nice table for two and the dinner was very good.

The Welcome Aboard show starred Jon Courtenay – very funny, vocalist and pianist.  He put on a very long show but was very very good.

The other speakers on board are Biblical Archeologist Michael Fuller (wife Neathery) and Scott Gottschalk (spiritual guy).  Paul asked us to sit in the front row of the second show so he could call us up for a preview of what we going to talk about – again, I sounded like I was blathering.

The stateroom is a bit noisy as it is right below Q-Sine, the Specialty Restaurant – moving of chairs and dishes clattering, etc.  We explained the situation to the chef in Q-Sine and he said they close at 10:00 PM and the noise should slowly stop.  It doesn’t look like it will be an issue and earplugs will help.

This is where we are headed on this wonderful itinerary. 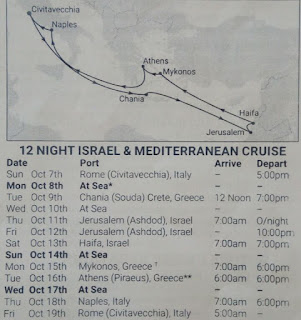