The Island of Guernsey is not English but instead, they are British subjects.  They have their own government, health care system, and police force.
We are anchored in the English Channel off the island of Guernsey and the town of St. Peter Port.  Today, we are tendering.  The weather is kind of nasty and we can barely see St. Peter Port from the ship.  The last time we were here, we also were dealing with cloudy, iffy, weather.  A day of gray. 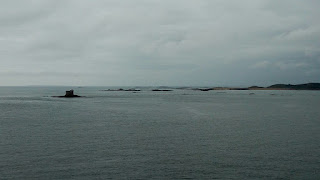 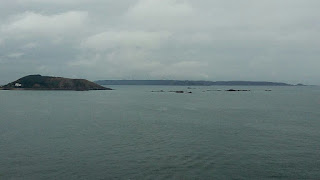 We have a late morning tour today -“Guernsey Island Drive” - that leaves us time to get breakfast.

The breakfasts continue to be pretty good after so many days on the ship.  In my opinion, t's the best meal of the day on this and most ships.  I have been lucky to find a quiet table in the morning in the corner of the cafeteria.

We went to the theater to meet up with our tour (one escort today but that means we are on the same bus).  We barely sat down when our group was called to the tenders. The ride was a little choppy and it did bother some of the passengers.  We had a nice view of the town of St. Peter Port from the tender. 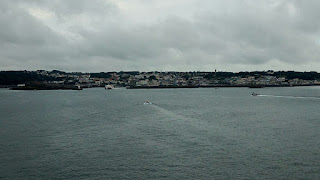 The rain started during the tender ride so we knew we would have to dash to the buses. The buses were parked around the back of the tender pier and I got in line at the end (per protocol).  By the time I got into the bus, my windbreaker was soaked and even my shirt was wet.  The other issue was that the windows were fogged and you couldn’t see anything out the window.  We were wiping the windows with our sleeves.  People started opening the upper windows – transoms – get some air into the bus.  That didn’t clear the windows but it did make the bus cold.

The guide, Kev, was also our driver – the bus was more like a large van.  The roads are a little tight on the island and having a driver and guide combo dealing with the roads and the rain was a little tricky.  The roads may have been narrow but at least they were not full of ruts and potholes - a relatively smooth ride.

Our first stop was The Little Chapel. 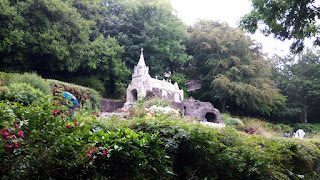 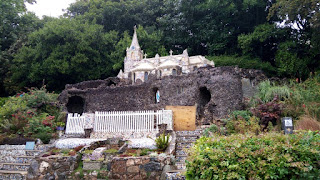 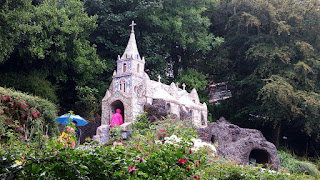 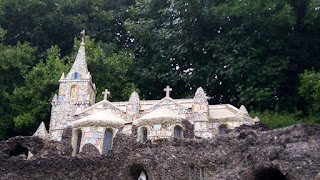 It is touted as the smallest working chapel in Europe if not the world.  This elaborate chapel (the third and final version was completed in 1923).  Over the years, it has been enlarged (one bishop could not fit inside), repaired, stabilized, and maintained. The chapel measures 16X9 feet and holds only about six people at a time (I did not go into it but instead sought out the facilities at the gift shop).

Next to the chapel was a large field with iconic Guernsey cows along with some Golden Guernsey Goats.  Even though it was dreary, and a lot of folks stayed on the bus, I did get some nice pictures of both the chapel and the cows and goats. 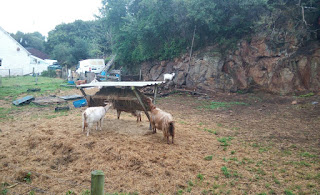 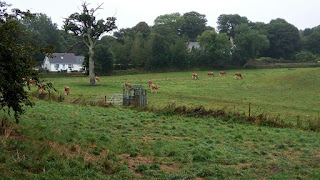 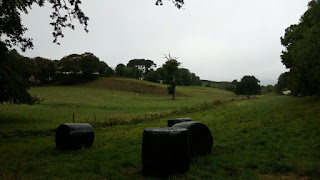 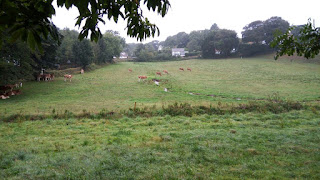 Our next stop was at the Silversmith Factory.  While some of the guests went in and watched the craftsmen at work, we tried to get some coffee at the Café on the grounds.  We did find a seat in the Café 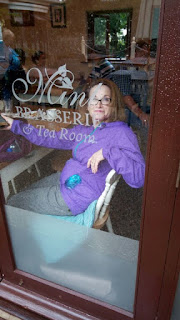 but they only had two baristas/waitresses working so we didn’t wait in line to put in our order.  When we got to the Shop, there were only two buses, but during our stay, another five buses arrived.  There were just too many people there at the same time.  We had some muffins we brought from the ship and checked our email.

We explored the grounds at the factory a bit and ran across a different kind of Guernsey Cow.  The gardens were amazing and we even found a druid stone that we could touch. 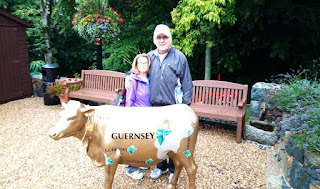 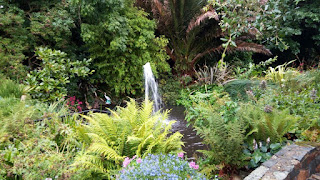 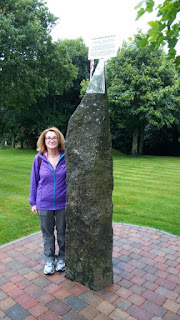 The rest of the tour took us to the west coast of the Island.  During our run up the coastline (the windows improved a bit so we could see the water), Kev gave us some interesting historical perspectives on the Channel Islands and WWII.  Let’s just say that after some 70 plus years, the folks on Guernsey are still unhappy with the decisions made by the English government (e.g. Winston Churchill).

We tendered back to the ship 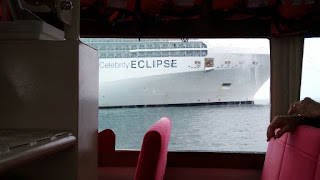 and had our usual lunch – all the salads (tuna, egg, and tossed) plus some pizza.

The afternoon was once again spent in the Solarium – a good place to be since it was raining and cloudy all afternoon.

After dinner, we went to the theater to see the 60s Cover Band, The Revolvers.  They did some Beatles and Beach Boys, among other groups.  They were good singers and musicians and we found them entertaining.

There were no acts up in the Ensemble Lounge so that was it for the day.