A glorious day at sea. 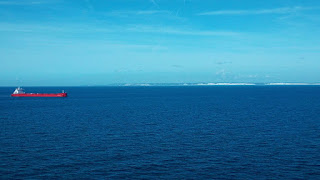 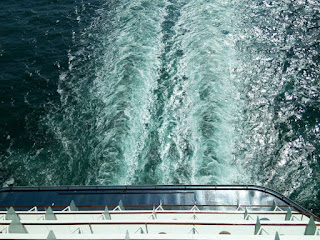 At breakfast, I was able to take in the totally clear sky, smooth water, and bright sunshine.  And even though the cruise is almost over, I am still liking the waffles, cottage cheese, and jams.

I walked across the top decks and it was definitely warmer.

My final talk is at Noon today, back in Celebrity Central – I was told that the theater was needed for rehearsals all day for tonight’s show.  Also, there was a glitch in that the Daily Program did not have “In Search of Jack the Ripper”, as I had announced, but “Identifying the Famous and Infamous”.  No matter.  (I am working on this journal in June 2019 so I actually don't recall which one of the talks I actually presented).

There were a series of run-overs in the talks (starting at 10 AM) and when I arrived at Celebrity Central, Benjamin had still about 20 or more minutes to go.  So, my audience waited outside a crowded venue waiting for him to finish and I stayed out there to make sure they didn’t go away.  I did start about 25 minutes late – the place was full at showtime and most of the audience did stay (I’m sure some gave up and went to lunch).  All in all, a good series of talks.

Lunch in the Café today was the Grand Buffet but the only item I was interested in was the Fish and Chips (the best non-breakfast food item on the ship).  The Fish and Chips were really good today (I got them right out of the fryer).  Since, the final two talks of the day finished around the lunch hour, the Café was slammed and seats were hard to come by.

Another afternoon of reading – not in the Solarium but out on the couches on Deck 14 Aft.  Just about finished with the Pendergast novel – this book does not have a supernatural element in it and I haven’t figured out who the bad guys are.  For a few minutes, I sat at a table next to the railing just taking in the warm rays of the Sun.  If only I had put on some sunscreen.  The Sun was really nice and I really wanted to stay longer.

We had dinner in the Café – gave the show tonight, “Euphoria” a try (we had seen it before and I wanted some pictures of the entertainment) 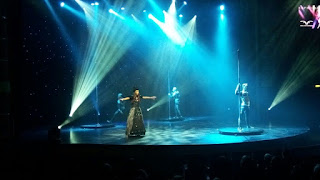 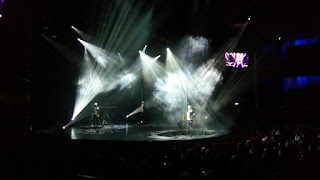 but soon we went to the run and did some more packing.