A cloudy and gray day at sea. 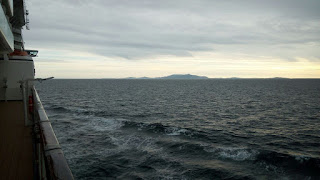 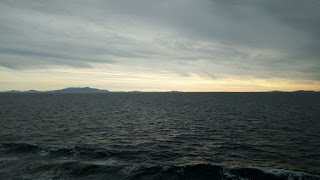 My second talk – “Forensics and History:  The Search for the Unknown Titanic Child” is at 10 AM in the Eclipse Theater.  This still gives me enough time to run upstairs for breakfast (breakfast in the Oceanview Café on a sea day is great as many of the guests are sleeping in and my only breakfast companion is the ubiquitous “Screaming Muzak Lady”).

Set up was quick – the AV guy was very helpful.  There were a few people there at 9:30 AM and I was worried that this would be a study section instead of a lecture.  But by the time I started, there were people throughout the theater including the balcony.  Based on a seating capacity of about 1300, I would estimate that there were between 500 and 600 people in the place (not bad considering there are only 1000 US passengers and a very large non-English speaking percentage).  No one left the talk in the middle and a few trickled in early to hear Benjamin speak.  I was very pleased at this turnout for a morning talk. 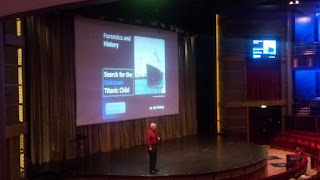 The theater turned out to be a good idea since the turnout was triple the capacity of Celebrity Central (which was home to a bible study group).

We found a nice pair of bucket seats in the Solarium and hung out there all day.  I am reading that new Lisa Black novel and making some progress.  However, the premise -  a forensic scientist investigating murders committed by a vigilante detective she works with, has started to annoy me a little.  The writing is good but again, the concept.

We broke for lunch (Oceanview Café plus Aqua Spa Café) and watched the seas go by in the afternoon.

We also had dinner in the Oceanview Café – simple salad and pizza. 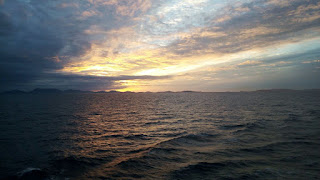 We are passing on the show – “Topper” – tonight as we have seen it.

We listened to the Party Band Cardinal in the Grand Foyer before heading to the room.