Scotland borders England on its South Border on Great Britain and is part of the European Union.  Scotland voted last year to stay in the UK following a movement to separate from England and Wales.  Scotland is surrounded by several bodies of water including the Atlantic Ocean and the North Sea.  Scotland also consists of nearly 800 islands.  The largest oil reserves in the European Union are found in Scottish water in the North Atlantic Ocean and North Sea. Scotland is nominally divided into the Highlands (rugged and mountainous) and the Lowlands.  Scotland is a volcanic country with several volcanoes (not super big ones) found in and around Edinburgh.  Three million people live in Scotland.

A pretty nice day in the capital of Scotland.

We are anchored today in the water off Queensferry, Scotland. 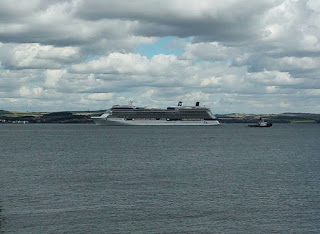 Eclipse Anchored (from the shore)

Before the first of three bridges were built spanning the Forth River, the Queen had to use a ferry to get across.  Now there is a North and South Queensferry – the first bridge, the Forth Rail Bridge, was built in the late 19th Century and is a railway bridge. The second bridge, the Forth Road Bridge, was built in the 1950s and is a suspension bridge and the final bridge, the Queensferry Crossing Bridge, was completed in August 2017, is a state of the art suspension bridge.  Queen Elizabeth II opened the final two bridges attesting to the length of her reign. (the pictures below were taken from South Queensferry) 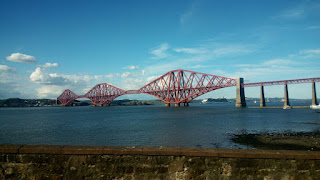 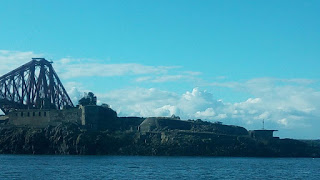 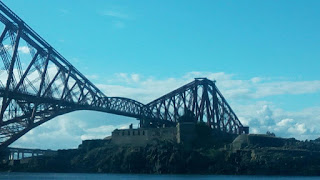 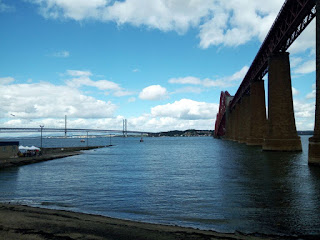 Today, we have an afternoon tour (one escort) – “Stirling Castle and Braveheart Country”, which starts at 1:00 PM and runs about four and half hours.

Breakfast up in the Café was a zoo as guests were trying to get their breakfasts and then their tender boats to go ashore.  The ship is operating both its own tenders but also has contracted with local companies to supply larger ships to also ferry people ashore.  I brought Ellen some breakfast (as I generally do).

Because we are on a tour, we do not have to get tender tickets. Instead, we went back up to the Café for a pre-tour snack.  The views from our anchor spot are terrific – the three bridges, the Forth River, and the rolling low hills of Scotland. 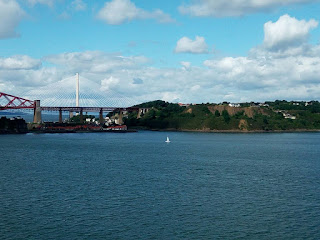 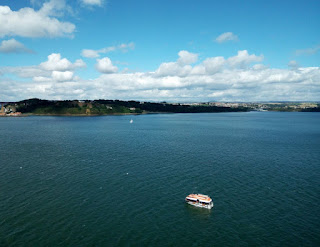 While waiting, I took the opportunity to take the iconic photo of Ellen against the ship's railing.

t 11:45 AM, we hopped on our tender (no waiting) for the 10 minute ride to the tender port in South Queensferry.  The port is located in a tiny shopping area a few minutes walk from the town.  We checked out the gift shop and then boarded our bus.  The tour consisted of 25 passengers leaving a lot of empty seats. The good and bad news.  Good: You can stretch out by yourself on a seat;  Bad:  You can’t stretch out because of the seat belt law.  The bus was comfortable enough but there was some issue with the chemical toilet on board (an acrid smell).

The ride to Stirling Castle took about 45 minutes.  The Castle is an imposing structure constructed on a “volcanic plug” (the lava cork on an old volcano) so it sits a few hundred feet about the grounds below.  This makes for terrific photographs of the surrounding countryside.  The famous battle of Braveheart was fought along the winding river clearly visible from the castle – and no, William Wallace and his men did not wear kilts (they didn’t come along until 300 years later).

Stirling Castle played a prominent role in Scottish History.  The Castle was occupied by the Kings of Scots back when England did not recognize Scotland as an independent country.  Robert the Bruce, King of Scotland, fought the English in nearby Bannockburn for possession of the Castle and the sovereignty of Scotland.


We had two options:  Follow the guide through the castle or explore on our own.  We chose the latter and visited several of the buildings.  Walking through the enormous castle is a little difficult because of the cobblestone and brick surfaces and the hilly nature of the site.  Yet the buildings were very well preserved (some fixing up, no doubt) – we went into the King and Queen’s area – bedroom and sitting room and even the throne room.  Pictures were allowed. 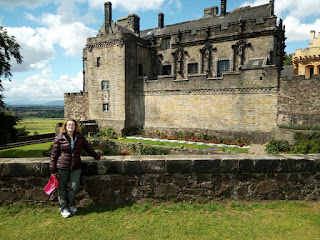 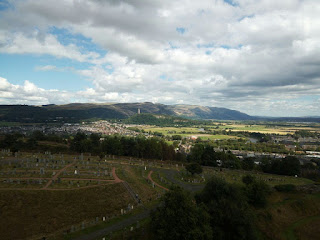 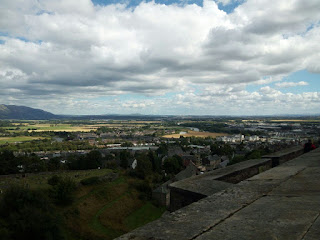 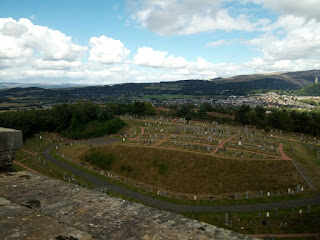 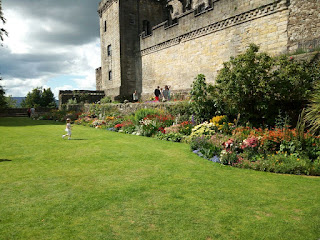 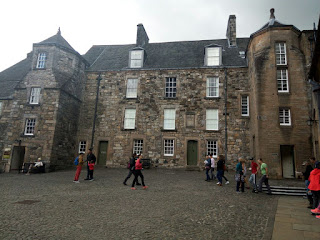 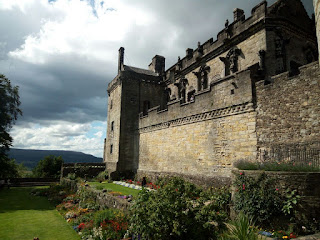 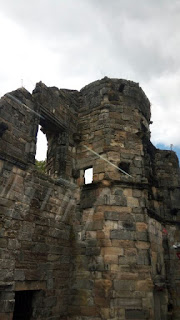 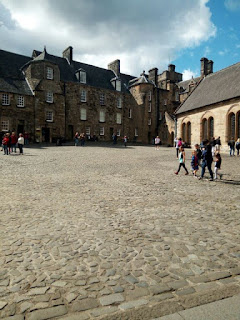 Our next stop was indeed the site of the Bannockburn Battlefield.  The guide told us that wasn’t quite true and that this was actually Robert the Bruce’s Camp (the battlefield was a few miles away).  Inside the exhibition, we were treated to a 3D presentation of the Battle from both the Scottish and English perspectives – it was very confusing – so many players from both sides.  Then we went into the theater, where another 3D film showed some actual battle recreations complete with master archers and spears bearers.  Some of the weaponry was on display in the battle room.  The next stop was an explanation of the battle from a big picture perspective.  The historian used a terrain map of the area to point out the troop movements and strategies used by Robert Bruce and the English.  Interesting but confusing.  The final presentation – once again in 3D – tried to sum it all up by recapping the timeline of the Kings of Scotland.  It ended up with King David of Scotland taking the throne.

Some of the guests went out to see the memorials on the grounds but we stay in the eating area (feet were tired) until it was time to go.

Another quick forty minutes and we were back in the cute little town (dating back to the 1600s and including a bridge built in 1492).  If we can, we might check out the village tomorrow before our tour.

We got in our tender line and there was no wait – we were going back in one of the contracted ships.  The ride was smooth and the docking with the pontoon perfect.
We only changed our shoes and went up to the Café for dinner. Simple dinner tonight – pizza and salad (with cherry tomatoes).  Tonight, there was no pasta station – hope that is not a new thing.

We caught the end of the Folkloric Show in the Theater.  There was a better turnout for this show than for some of the entertainers.  The show was cute and entertaining.  I wanted more dancing but the three girls did a Jig and a Wheel and that was good enough.  There was also an MC that sang and a woman who sang and played the violin. They were accompanied by a piano, an accordion, and of course, three men with bagpipes and a drummer.

We listened to the Cardinal Party Band in the Grand Foyer and then went up to the Solarium.

Tomorrow, another day in Edinburgh.