We have a morning tour today (one escort) – “Antrim Coast and Causeway” – departing at 10:15 AM.  Again, that gave me enough time to get breakfast in the Oceanview Café.
We spent very little time driving through Belfast although our guide did point out a building with an “HW” on it (I couldn’t find it), which was the Harland and Wolff Shipbuilding Yard, where the Titanic was built.  Instead the bus left the pier area and headed for the countryside.  The map below shows some of the locations on this tour. 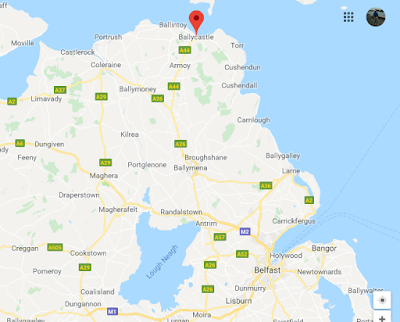 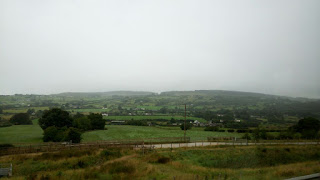 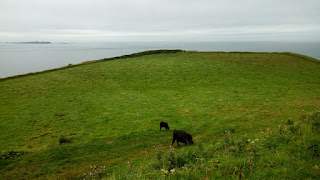 We also came across what appeared to be a huge "fern field". 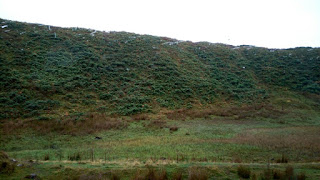 The bus then turned toward the Antrim Coast, a very scenic stretch of coastline similar to the Pacific Coast Highway (except the Irish Sea is not as nice as the Pacific).  Also, most of the coastline was blanketed by a thick fog.

We stopped at the Village of Carnlough for a morning snack break of scones and coffee/tea.  The scones were great but microscopic – I wanted to ask for a second scone but the place had all but cleared out so I left as well and went across to the Marina for some photos. 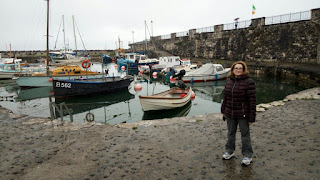 From the Inn, we proceeded along the coast to our next stop – the Carrick-a-Rede Rope Bridge.  This rope bridge spans a ravine 100 feet down and has great views of the sea and cliffs.  We were not going to be able to cross it.  However, we were supposed to get a picture of the bridge.  However, the fog was so thick that you could not see the bridge or the ravine.  We stayed in the bus for the brief five minute stop.

We stopped to get pictures of the interesting but ruined Dunluce Castle, once the home of the mighty McDonald Clan (not the McDonald clan we are so familiar with in the US). 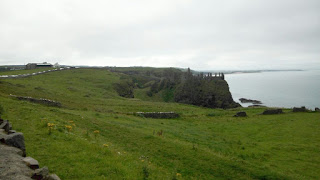 The main attraction on this tour is the “Giant’s Causeway” – a UNESCO World Heritage Site (1986) (the only WHS in Northern Ireland).  Ireland is a volcanic island and the Causeway is the result of a volcanic eruption and lava flow that occurred some 50 million years ago.  The flowing lava cooled and formed some incredible structures including the basalt columns.  These columns, some 40,000 of them, look man made due to their perfect structure and hexagonal sides.  But they are actually part of the volcanic event.  These structures, some as tall as 40 feet, are amazing.

We entered the site and decided to walk the easier of the two trails – the Blue Trail heads downhill and you can take a shuttle back up.  The Red Trail requires climbing a steep hill and there is no shuttle return.  One of the site workers took our picture and we got plenty of shots of coves with lava shores.  At the very bottom of the road, we came across the basalt columns – they still looked artificial but nature can make some pretty awesome structures.  Many of the more fit (and young) visitors used the basalt structures as a climbing wall.

The Causeway also gave us some great views of the sea and coastline. 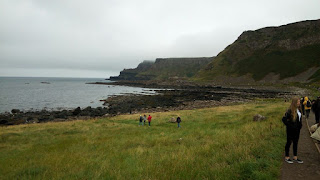 Our trek along the Causeway is documented in the following photographs. 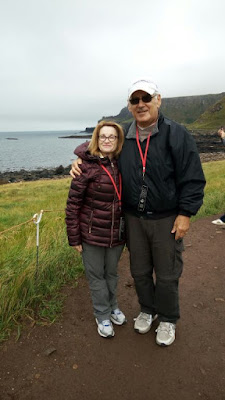 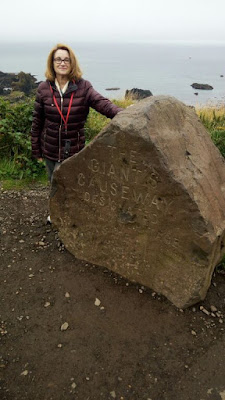 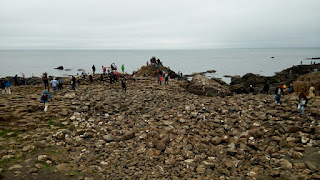 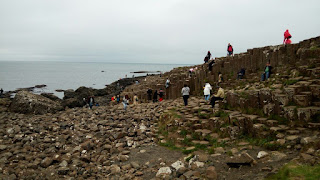 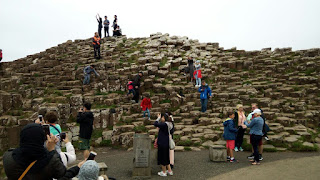 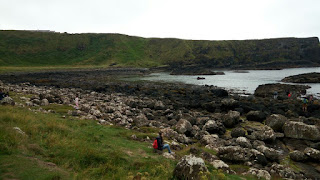 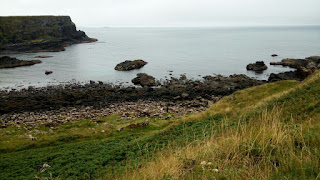 We took the shuttle (free to us on tour and 1.75 Pounds for regular ticket holders) back up to the visitor center.  We spent the rest of our time there drinking a diet coke and “Hot Ginger Beer” (another acquired taste) and visiting the gift shop.  They had some inexpensive and well made caps but I didn’t like the design.

Our final stop would be at the Royal Crown Hotel, which is on a hill overlooking the Royal Portrush Golf Club (the site of the 2019 Open Championship).  The views of the sea and golf course were fantastic.  This place will be crazy town during the tournament. 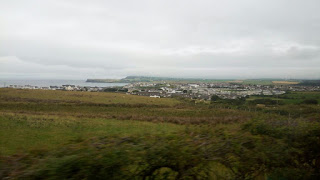 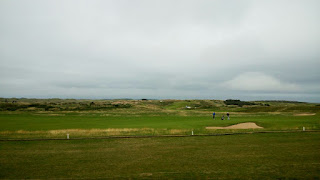 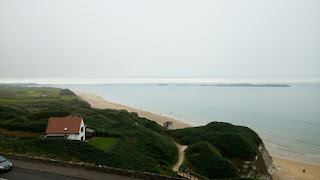 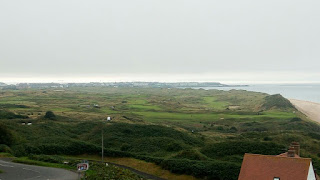 While most of the group had Irish Beef, mashed potatoes, and braised vegetables, the hotel was able to provide us with Fresh Grilled Salmon plus the potatoes and veggies.  The food was great.  Supper also came with a drink – I had the dark lager, which was strong but good.  Dessert was some kind of baked Alaska type thing with white cake and fruit enclosed in meringue sides (very unusual).  It was good though along with some tasty coffee.

A final rest stop at the hotel and we were headed home.

I guess I didn’t reckon how far home was and when the guide indicated that the ride would take over an hour, I now regretted having the lager and coffee.  Needless to say, it was a tense ride home (which didn’t help) but, alas, I did make it.  Except for the fog, it was a very nice tour.  The tour guide told some very interesting stories and gave us some great insights into the history of the area and of the sites we saw.  All of the guides on this tour have been very good.

We had a little snack in the Oceanview Café before getting changed for Jayne Curry’s second show in the Grand Foyer at 8 PM (we passed on Christophe Caress, a hypnotist we had seen before years ago on the same ship with Jayne).  People had gotten there pretty early so we were up on Deck 4 three deep.  I could barely see Jayne but I certainly could hear her (amps were at max). 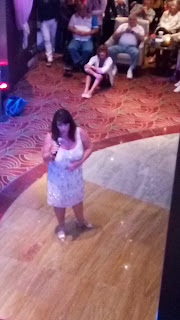 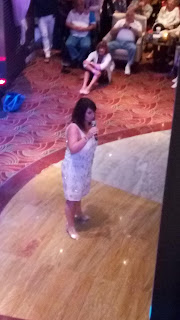 She started off with ballads and progressed to more rock stuff – she also ran around Decks 3, 4, and 5 during her numbers.  A very energetic concert – the audience loved.  We saw her later and found out she will be on the Constellation with us in October.

After the concert, we caught Gilly and the Girl’s set in the Ensemble Lounge – they did a nice song list – pleasant and soft.

Back to the room for P and Q.