We have finally gotten back into seasonal weather – cloudy – possible rain showers – and mid 60 temperatures. 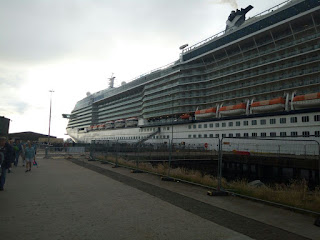 We have another early tour today (one escort) – “Leisurely Scotland” so we had room service deliver breakfast (I had enough time to eat upstairs but I just didn’t want to deal with the crowds in the Café this morning).

We departed the ship for the buses about 7:30 AM and the bus left right on time at 7:45 AM. Duncan was our tour guide and he was the best tour guide we have ever had (perfect English and full of interesting stories). Donna was our cheerful and skilled driver. Our main destination would be the town of Inverness, home to golf and monsters. We went a short distance on the A9 then got onto to the country roads. We passed through some villages, e.g. Dingwall, and then made a short stop at Beauly (“Byoolee”) to look at the ancient Priory and Cemetery.  NOTE:  Check out the the bilingual sign – how does one even pronounce the Gaelic words. 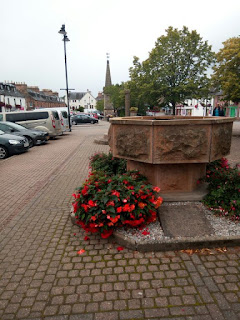 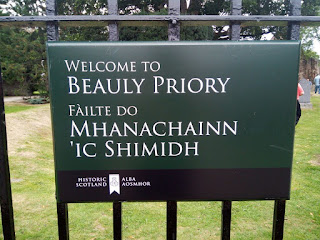 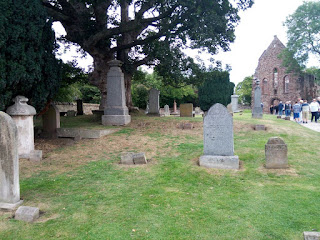 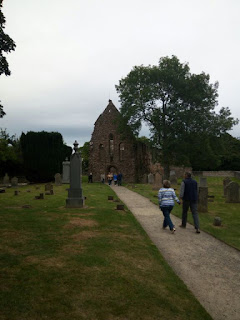 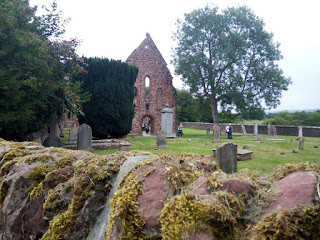 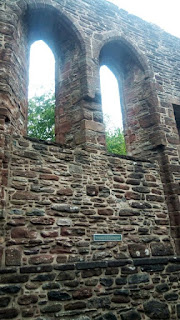 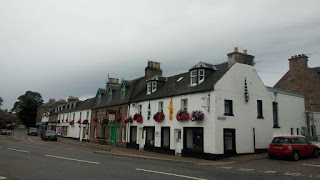 The Village of Beauly


We then made a short shopping stop at “Nessieland”, specializing of course, in all things Nessie.  They even had a small statue of Nessie.  Oy. 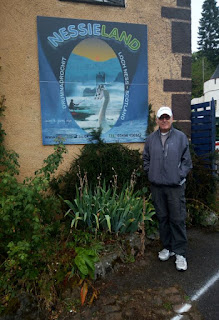 Our next destination was Loch Ness – getting there took us along gentle rolling hills and meadows.
I was able to get a picture of the purple heather in the meadows - not a great shot in the grayness. 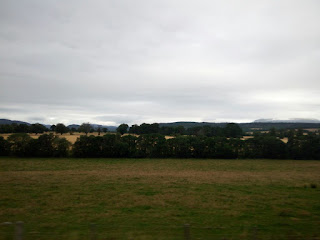 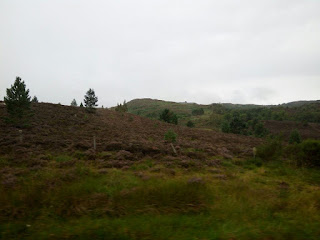 On our way to Loch Ness and the Purple Heather

We drove past the village of Drumadrochit and along Loch Ness. The lake is 23 miles long and 900 feet deep – can it hold a breeding population of prehistoric Plesiosaurs? Probably not, but it might have some big fish and tricky lighting conditions. We did finally find a stop, where we could take pictures of the lake. As was the case last time we were here, the lake was a dull gray made so by the overcast skies. No Nessie, I am afraid. 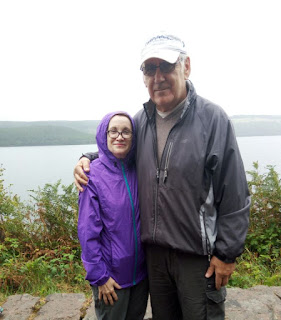 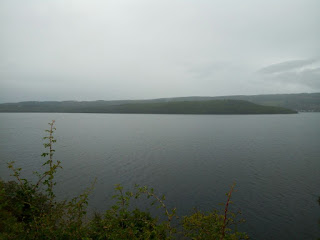 
We also made a brief stop to check out the special Scottish cattle that you find in the Loch area. 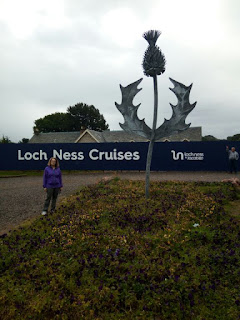 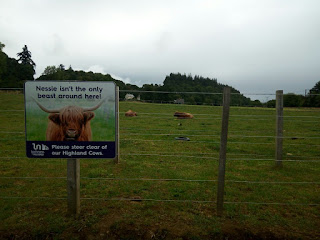 From the lake, we made our way back to Inverness. We were scheduled to have lunch at the Mercure Hotel (yes, that Mercure). We got there a little early so we had to wait a bit to get seated. While we were waiting, several other tour buses arrived for lunch. We did get seated first. We were given a choice of beverages on our way in (I grabbed a beer and Ellen a wine cooler). Duncan had told us that the veggie option would be a nice pasta. What we got was curried lentils and other beans over white rice (preceded by a tomato salad with olive oil). I wouldn’t have eaten it if I weren’t hungry. Dessert was nice – some kind of cherry crumble thing along with good, if not decaf, coffee.

We ate pretty quickly as we had some free time to shop the town. The town of Inverness is quite nice – little shop and lots of pubs. There was a Subway and a McDonalds so the town now had official status. We didn’t find too much in the shops and made our way back to the Mercure and our bus. 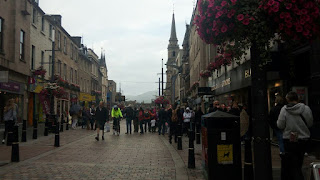 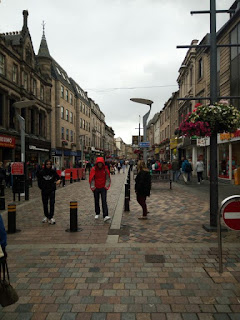 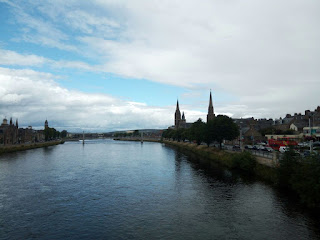 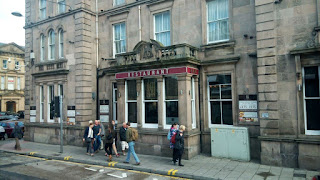 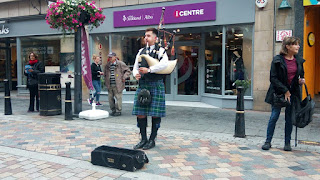 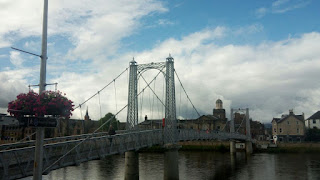 Our final stop would be at Culloden, the battlefield where Bonnie Prince Charlie fought the well armed forces of the Duke of Cumberland for control of the throne of Britain. The Duke roundly defeated the Prince and his Jacobites and then went on to slash anyone in his way – Jacobite or not. Today, the battlefield is marked by Red and Blue flags where the two battle lines were located and a museum complex has been constructed containing items from the period as well as AV presentations. There is also a self - serve food area, where we bought some drinks (IRN BRU, a local soft drink and a Diet Coke). We sat outside and drank our drinks and took in the scenery.  Just for us, the sun came out for a spell making the scenery that much more spectacular. 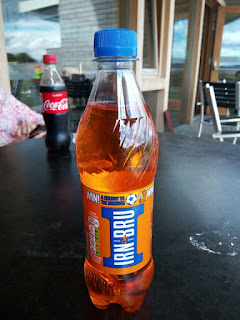 After our visit, we headed home – had a chance to see a Scottish golf course before driving along the Moray Firth and crossing the Cromatie Bridge. 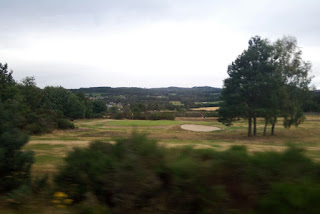 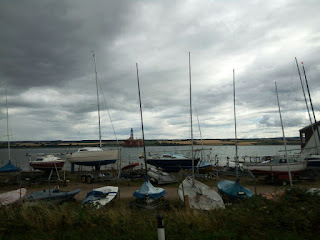 Marina Along the Firth 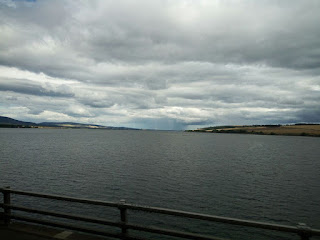 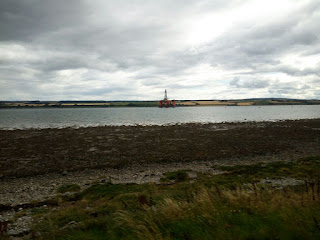 The Moray Firth and Cromartie Bridge

We then headed back to the ship – driving along the High Street to look at the High Street Murals. When we got to the port we noticed that there were several buses waiting to offload passengers. There were also several hundred passengers lined up to get onto the ship. We waiting about 45 minutes before we could get off. What had happened was that the tide had gone out putting the Deck 2 Midships gangway below the level of the pier. That left only the Deck 4 gangway available for the passengers, all of which returned at the same time from afternoon excursions. Once on the ship, the process went quickly as personnel in the scanning area were helping passengers put their bags on the scanners – that is generally a slow process. Now, crew members took your bags and put them on the belt and that was quick. It was a lot more work but it avoided a long wait.

After a shower (I need that) and a change of clothes we gave the Dining Room a shot. Even though it was late, we still got table 401. I ordered a pizza off the children’s menu. The main courses took a long time to get to us. It turns out that the pizza was dropped during a collision in the kitchen and had to be remade. We eventually got our food and caught the end of Rob Lewis’ Phil Collins tribute – he did not sing “Separate Lives”.

At 8:00 PM, I once again participated in the ego-killing game show – “The Chase is On”. I was the last chaser to be picked (I guess that’s a good thing). Tonight, the chasers were me and Benjamin Taggie, Giuseppe, the Hotel Director, and the Captain. With the three ship employees, it was mostly fun with answers being shouted out. All of the Captain’s questions had to do with Greece. The most correct answers tonight was 6. I got five and tied my opponent but I could not think of the name of a baby goat – I knew the answer but you cannot get it to come out of your head. It’s frustrating but when you see the other misses by the other players you see what time pressure can do. My other misses had to do with with which Beatle played the guitar left handed and something about the color of the Google Logo. Anyhow, if I do this again, I will not miss “Kid” or Paul McCartney again. 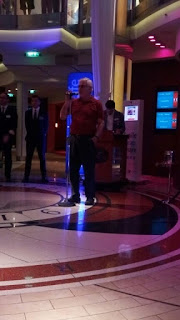 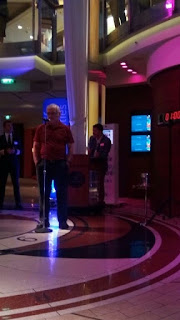 The Chase is On

A long and wonderful day in Scotland