We are the birthplace of the Beatles.

Liverpool is the sixth largest port in Great Britain.  Located along the Mersey River on the North West coast of England, Liverpool has a population of about 500,000 people.  While parks and historical buildings are the pride of Liverpool, it will also be known as the birthplace of the Beatles.

It is a gray day in Liverpool.

You can see the city from the ship.  You can also get a good view of the Mersey River and the famed ferry (Gerry and the Pacemakers' hit song - one of my favorites). 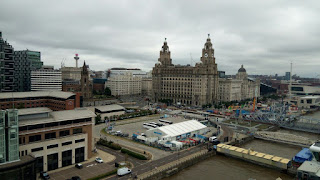 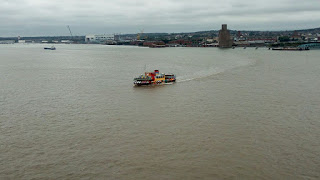 We have an early tour today (one escort) – “Liverpool City Highlights” so we ordered room service.

We were in the Eclipse Theater at 8:30 AM and our tour left for the buses about five minutes early.  Our guide is Vi (for Violet), who sports a posh North London Accent.  The tour started with a brief city tour and Vi pointed out the Royal Liver Building (pronounced “Lie – Ver” like driver) complete with the two mythical Liver Birds on top.  The Liver Building also boast of having the largest clocks in the country (bigger than Big Ben). 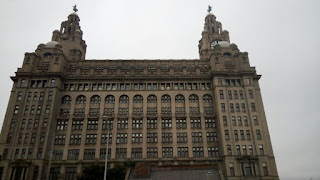 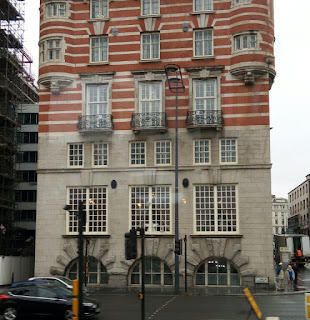 and the Cunard Building, Headquarters of the Cunard Line (Lusitania and Mauritania among others).  I believe Cunard picked purchased the White Star Line - Cunard calls its level of service "White Star".

There is also a neat statue of the Beatles near the pier but we could only see the back of the installation.

As we drove through the streets, Vi pointed on the Cavern, the nightclub that the Beatles played before fame found them – I could not get a picture and the bus could not stop there.  Oh, well.

We did made some stops on this tour.

The first was St. Johns Park – one of many parks in Liverpool. 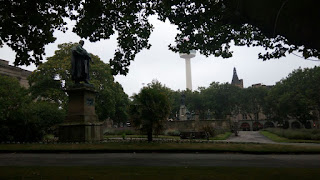 The stop at the park was just a mini-rest stop suitable for pictures.

We next stopped at the Metropolitan Cathedral. 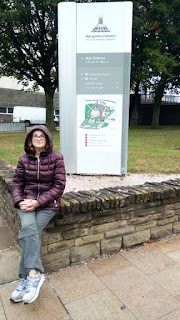 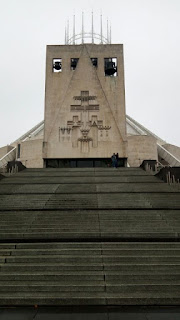 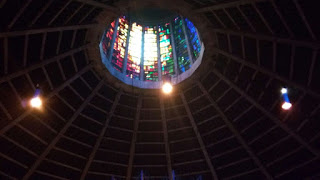 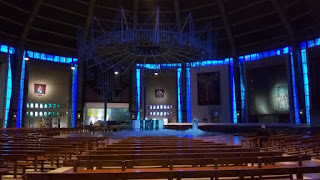 The Catholic Cathedral was designed by a Protestant architect after World War II and restricted by several design rules:  Must cost less than a million pounds; must have the main alter closer to the worshipers, and must be bigger than St. Peter’s Basilica in Rome.  It is constructed in a hyper modern design (I did not like it), which is very unusual for a Catholic Church.  The inside is massive with an impressive dome.

Across the street from the Cathedral was John Moores University.  I took this picture because the scientist working on the Jack the Ripper DNA project works at one of the campus of this school - maybe even this one. 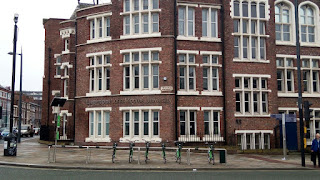 The next stop was another Cathedral, the Liverpool Anglican Cathedral. 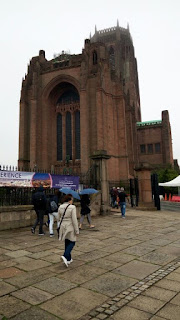 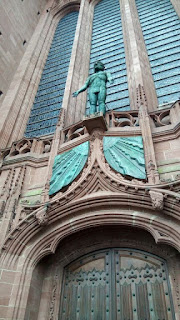 This structure was more in line with cathedral architecture and also quite impressive inside.  Also impressive was the cemetery located in grounds adjacent to and below the level of the church.  However, near the walkway to the church were three memorials to soldiers who had lost their lives in conflicts up to present day Afghanistan. 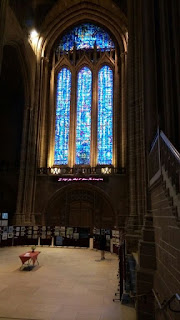 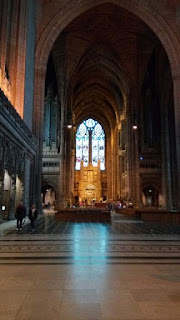 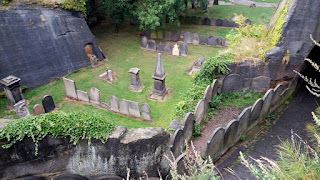 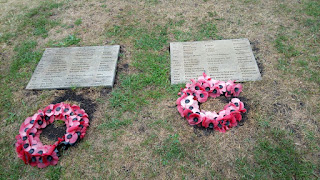 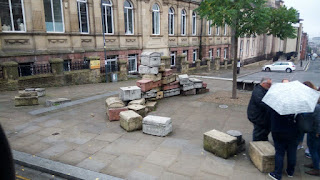 I found out later that the installation was created in 1998 and is entitled "A Case History".  The suitcases are labeled with people and sites in Liverpool.

From the Cathedral, the bus drove to the suburbs of Liverpool to Penny Lane, a street in the neighborhood where Paul McCartney and John Lennon grew up and, of course, the subject of the famous song.  In this neighborhood were several schools when Paul and John attended as well as other sites related to the two Beatles.  The bus eventually got a parking spot on Penny Lane so guests could get a picture of the street sign. 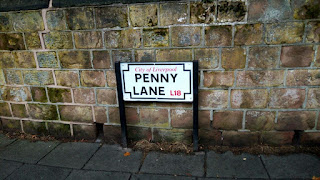 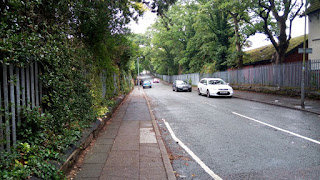 On the way back, Vi pointed out the Chinatown area of Liverpool. 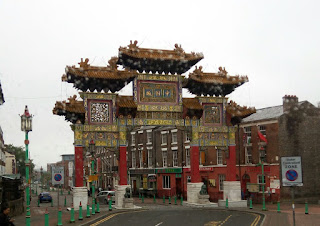 The gate to the area is the largest Chinese Arch outside of China.  Very impressive.

The bus then took us back to the port – some people got off to check out the port area
and its Beatle Experience Museum.  We could see the Ferris Wheel at the port area and the Eclipse docked. 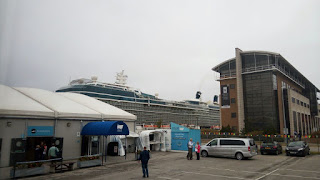 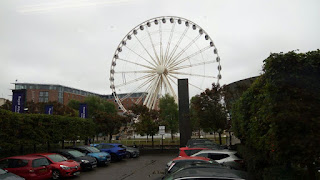 It was getting colder and windier so we went back to the ship.

After lunch in the Oceanview Café, we settled in to comfy seats in the Solarium.  I gave up on Lisa Black’s, “That Darkness”, the first in her Gardiner and Renner Series.  When I found out that there were at least three of these, I couldn’t see waiting three books for something to really happen between protagonist and antagonist.  I am now reading “City of Eternal Night”, a brand new and 17th Pendergast Novel by Preston and Childs.

There was little on the menu in the Moonlight Sonata Dining Room – Hake was the fish and even though we confirmed that this fish is Kosher, we decided to pass on the fish.  Instead, we went to the Oceanview Café, where the pickins were also slim – Cesar Salad and Pizza - safe and easy.

We passed on “Rock City”, the Production Show, and went to the Ensemble Lounge to hear, Michael Redden, Decameron Duo, and finally Gilly and the Girl in succession.  The Cardinal Dance Band was too loud and even in the library, the drum sounded like a shotgun going off.

Back to the room for some P and Q – actually later than we usually do.

(Note:  If the spacing and layout of this post and the previous few posts seem off, it's because I am using Blogger directly - Live Writer has a software glitch and can't be used to upload posts.  Hoping for a quick fix because Blogger is clunky at best)