Dublin, the capital of the Republic of Ireland, lies on the River Liffey, which separates North and South Dublin.  The city has a population of 553,000 and the greater urban area about 1.2 Million people.  The city has over 600 pubs but is also the second largest center for IT in the World (next to Silicon Valley) with tech companies lining what has been dubbed “Silicon Bank” along the river. 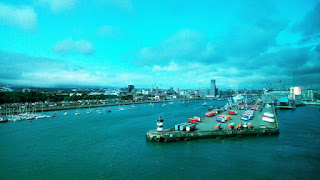 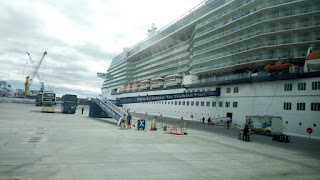 We are on tour today (one escort) – “Irish Countryside and Glendalough” – in the afternoon so no rush for breakfast (Ellen still got room service – her favorite egg white omelet with mushrooms).

The shuttle to the City Center is pretty pricey so we thought we would see if it was possible to walk off the ship.  Turns out that Eclipse is docked in the commercial port on the river and walking off is not an option.  So we will spend the morning on the ship and meet up with our tour after lunch.

I spent some time in the Aqua Spa Café catching up on my log.  The morning tours had left and the Café was deserted.  So I had my coffee in peace – no screaming woman trapped in the muzak - just easy listening new age music.  They closed the food at 10 AM but the coffee was still available and that’s all I needed.  The Cafe is definitely the best place to get some work done and still relax on this ship.

Because of the relative emptiness of the ship, we got a table at the Aqua Spa Café for lunch.  I had my usual lunch – green and other salads supplemented by the great tuna salad disk at the Café.

At 1:30 PM, we found our bus and guide, Jerry, at the pier.  The gangway was on Deck 4 midships and we walked downhill along a pretty long ramp (right angle turn near the bottom) (when we returned at 7:30 PM, the ramp was horizontal – also, crew members were touching up paint spots on the hull – those spots were now below the level of the pier – all about the tides on these rivers). 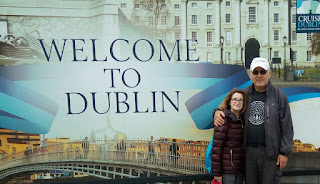 Our bus passed several IT companies located along the so-called "Silicon Bank".

a bridge designed by Catalan architect, Calatrava (all his bridges that we have see, are the same), 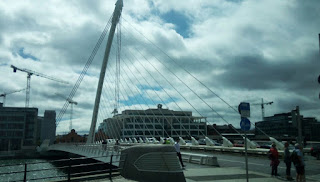 the unique Convention Center (“tube in a box”), and the two sports  stadiums – one for football and the other for hurling.  We passed a lot of pubs, some that were famous, many buildings associated with Trinity College.  Our tour took us past a memorial to the Irish Potato Famine (several figures standing on the sidewalk). 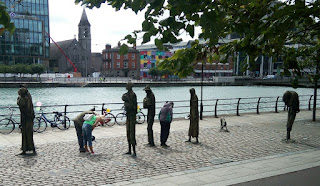 We were told that the real estate market in Dublin had gone crazy with a two bedroom apartment now renting for 2000 Euros per month.  Inventory was down because no one was building and demand was up due to the large number of students needing a place to stay.  Jerry also told us that the 8000 homeless people in the city were being housed in various places including hostels.

An interesting site along the way was Oscar Wilde's home. 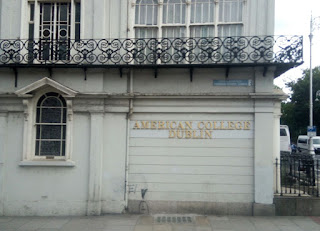 The bus then proceeded through the posh neighborhoods of Dublin where houses run in the millions of Euros.  From there, we started our run to our destination in the Irish countryside.  We passed several quaint villages, farms, and lots of sheep along the way.  Jerry told us about the Potato Famine, the Great Migration.  Before the famine, Ireland had 9 Million people; now the country has 6 million.  Many folks perished during the famine from starvation and disease and 1 million Irish emigrated to the US, Canada, and the UK.  The inheritance of farms precipitated the famine in a way.  Farms had to be handed down to children by dividing the land equally; the same in the next generation.  This turned huge farms into subsistence farms only suitable for potatoes – when the blight hit (thought to have come from the Netherlands), people starved.

It took about 90 minutes to reach our destination – “The Monastic Site of St. Kevin” located at Glendalough (Gaelic for Glen – Valley; da – two; lough – lake) – Valley of Two Lakes.  St. Kevin wanted to be a hermit and moved to this area in the 6th Century.  He picked up about 30 followers and they built this enclave.  The impressive “Round Tower” – standing 30 meters high - has windows that align with the compass; the structure has had some repair work over the years.  The complex is entered through the “Gateway”, which is composed of two granite arches.  On the West wall of the gateway, there is a stone with a cross, denoting the Sanctuary status of the complex. There is also The Priest’s House and
The Cathedral, 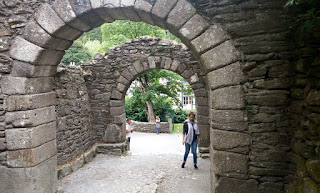 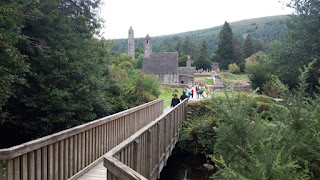 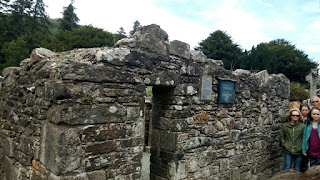 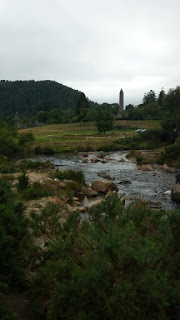 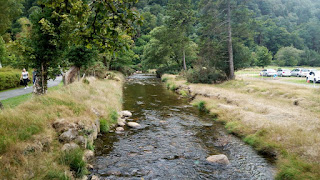 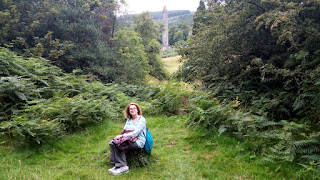 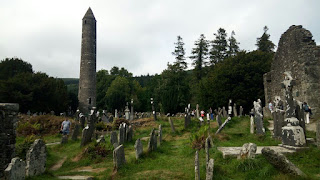 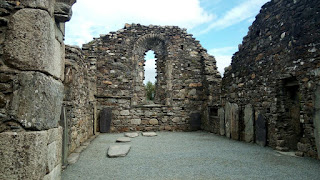 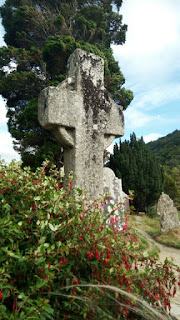 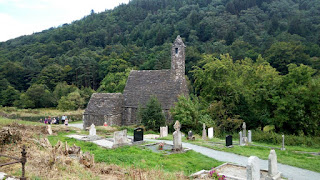 – all of these structures were built using stone block and no mortar.

The structures were destroyed in the 16th Century but some have been restored and the rest are in pretty decent condition.  We toured with Jerry through the structures but opted out of walking some km to either of the lakes.

After the tour of the site, I spent some time drinking my $5 (1.18 exchange) hot chocolate.  I had spent a few minutes earlier trying to order a mocha latte but couldn’t get the concept of mocha through to the barista, so a hot chocolate it was.  Probably the most expensive hot chocolate I have ever had.  I used the nearby Glendalough Hotel’s Wi-Fi to check up on things.
When we got ready to leave at 5:15 PM, we wound up one passenger short.  She was located some 15 minutes later – she had gotten lost.  It took another 90 minutes to get back to the pier.  Near Dublin, we saw the Sandymount Strand along the River Liffey 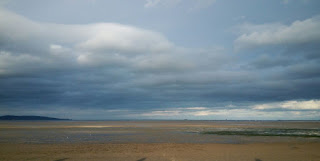 as well as the new high tech looking incinerator (taking some of the load off of the landfills). 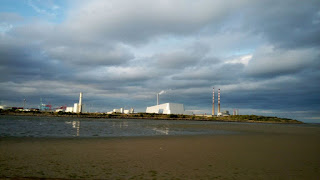 We grabbed dinner in the Oceanview Café – I had some stir fry made (OK) and a dessert waffle.

Because of our late return to the ship, we attended the 9:00 PM show in the Theater. The headliner tonight was another male singer, Darren Day.  Darren was in “Joseph” in the West End and also play Danny Zuko in “Grease”.  I felt like we had seen him before but I would have to check.  He did have a great singing voice – very stage musical style – but also threw is some good and many iffy impressions.  Overall, a very entertaining evening.

Got back to our room pretty late and by the time we settled down it was near midnight.

A fine day in Dublin.