We left our shade open so we got a little bit of light entering our room (we are on the inside of the building facing another tall building so the amount of light is pretty small) – just enough to keep up from sleeping until Noon.  Our neighbors helped out by providing a wake up call as well.

Today’s exploration plan involves walking to the Sagrada Familia, a spectacular Temple started by another architect but “finished” by Gaudi.  From the hotel, we head north on Passeig Gracia 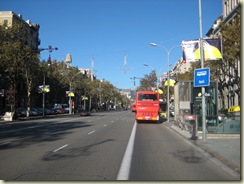 On the way, as a warm up , we passed the other Gaudi structures.  First, the Casa Batllo 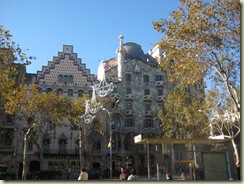 The street on which these buildings sit is called the “Block of Disagreement” due to the presence of such varied examples of architectural design.

A few blocks up and on the other side of the street sits La Pedrera.  This time, we take advantage of the free look at the foyer and museum of this building 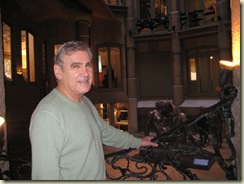 In La Pedrera – the staircase leading to the museum

The atrium of the building is also unique 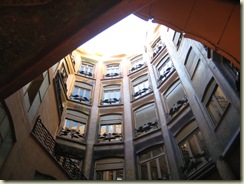 From La Pedrera, we took the Ave Diagonal and another interesting structure, the Casa De Les Punxes 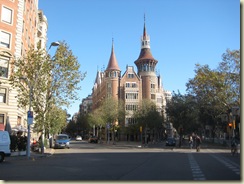 or the “House of Spikes” – look closely and you will see how the house got its name. 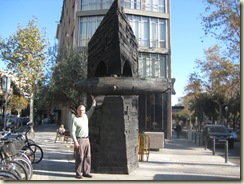 Maybe it’s a torpedo – there was no plaque explaining the work of art.

A few blocks away and through the trees, Gaudi’s masterwork became visible, the Sagrada Familia 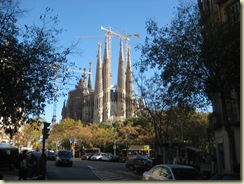 This building is designed to contain 18 towers (it now has 8).  It is also intended to incorporate a large number of religious symbols (12 apostles, 4 evangelists, the Virgin Mary, and Jesus Christ and have three facades.  Some of these elements can be seen on the exterior walls of the temple 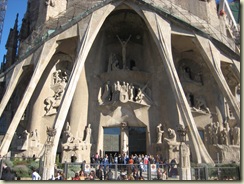 The cornerstone on the site 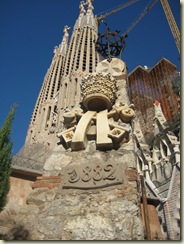 The structure is now scheduled to be completed in the year 2040.  Who knows?

One interesting thing I noticed when looking at the Sagrada Familia.  Near the site are trees with little grape-like fruits on them.  These fruits look just like the grape-like structures Gaudi placed on the towers 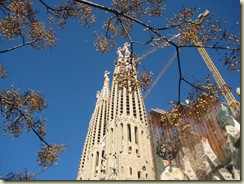 Grapes on the tree and the towers

We decided to do one more tour of the Gothic Quarter before leaving the city.  The first time through, we did not see Placa Sant Jaume 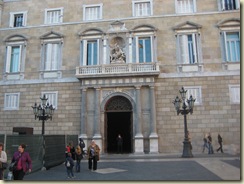 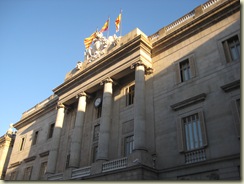 This square is the site of political demonstrations and sporting event celebrations.

A nice final place to visit in a wonderful city.