The room indeed was quiet and the shower did flood the bathroom.

The breakfast, while similar to the one in Bath, was not quite as nice.  Conspicuously absent was the berry compote that really made the cereal special.  The food was good enough and the selection OK.

We arranged for a taxi with the desk clerk.  The cab fare from Holiday Inn Express Southampton West to Ocean Pier, Southampton came to a healthy 13 pounds.  The next time we do this, we will most likely stay at the Ibis Hotel in town (it was a nice place in Nice).

Checked right in (priority check in).  Our bags were tagged and handed off to the porters; we went through security quickly (even though security was just like airport this time- belts, laptops, jackets were screened separately).  It was a gray day in Southampton but I did take some pictures from the open deck – not a whole lot to sea at this port on this day. 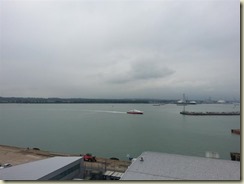 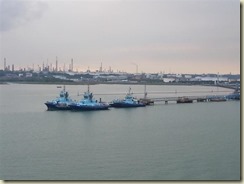 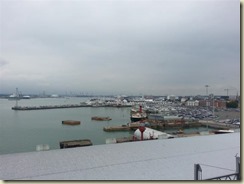 Southampton from the Ship

We are, as always, berthed on the Entertainment Deck – this time we are on the starboard side in room ED27.  As has always been the case, the ED rooms are very nice with the only noise coming from the ship’s workers moving through the halls. 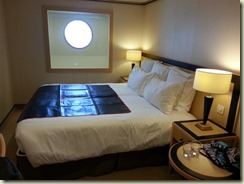 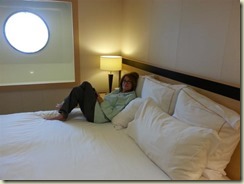 We had lunch in the newly renovated King’s Court (many areas of the ship underwent refit but the big changes are on Deck 7 – the buffet and adjacent public areas).  The buffet is now housed in a single huge room (instead of separate little areas) – there seem to be more selections on the salad bar and new items all through the buffet.  There is a vegetarian station.  It is a major improvement and the food even seems better.

The Boat drill was held at 4:30 PM – Our Muster Station is in the Gym.

I met with Alex and AV Tech Ramel in Connexions (Deck 2) after the Boat Drill to try out our equipment – the process took very little time and everything checked out.  I will be giving the same four talks I gave on the QE.  Other speakers on board this voyage are Dennis Maximillian Molnar (Military Historian/Scientist and first timer on Cunard); Robert Key (Antiquarian and Politician) (he was on the QE and got off in Dubrovnik – we might have gotten his wonderful room); and Seth Andrew Gopin (Art Historian/Scientist).

We watched the sail away from one of the public rooms – it was a gray and dreary sail away and it may just stay that way as we cross the Northern edge of the Pond. 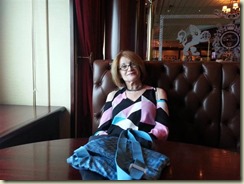 We decided to try the Britannia Room tonight (we did not eat in the Dining Room the entire time on the QE).  We waited in the Golden Lion until 6:30 PM and then checked with the Maître D’ (Very nice man), who found us a wonderful table for two.  On the menu was Minestrone (molto bene), Cesar salad (specially made for me), pasta with salmon (not quite what we thought it was but it was good) and the veggie dish I thought I would try – “twice-baked potatoes with refried beans, guacamole, and salsa” (it was different but OK).  The service was friendly and quick and the iced tea came in a huge glass.  A good embarkation night dinner.

We caught the Welcome Aboard Show – there are four vocalists and 12 dancers split 50/50 male and female.  Everyone is very good.  The show was enjoyable. 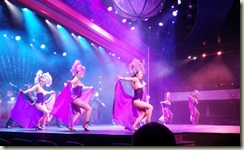 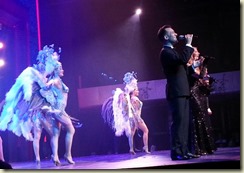 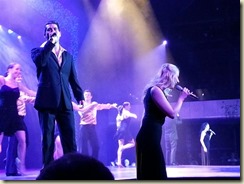 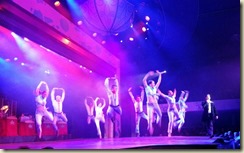 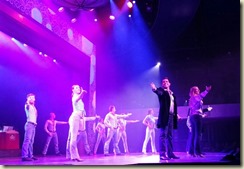 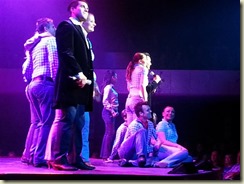 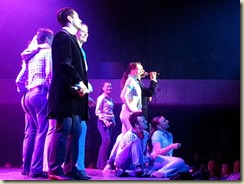 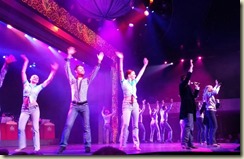 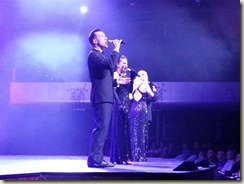 We listed to Gavin Burke in the Golden Lion Pub – good pianist and vocalist.

We went back to the room for quiet time and moved our clocks back one hour (the first of five time changes on the way to New York).

The room is QUIET and the seas are smooth.