Our luck with weather has run out as today is cloudy and rainy.  No matter because we are off to Southampton for one evening’s stay before boarding QM2.

We are not walking to the train station today (even if it weren’t raining).  The hotel scheduled us a cab and for about 5GBP, we were at the station in less than 10 minutes.

Prior to leaving on this cruise I had purchased on-line tickets for the train from Bath to Southampton – we had reserved seats for this trip but it didn’t really matter since the conductor never even looked at our tickets.

The train departed Bath right on time at 11:36 AM.  It was a very dreary ride and the dirty windows made it impossible to get any decent photos. 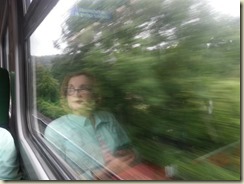 Ellen’s Reflection in the Train Window (artsy at least)

The train arrived in Southampton on time at 1:04 PM.

We took a taxi from the train station to our hotel, the Holiday Inn Express Southampton West (12 GBP fare).  The plan again was to stay in Southampton the night before the cruise so we would have no difficulty in boarding QM2 on time.  However, despite what I read on line about this hotel, this property was literally in the middle of nowhere.  We asked the desk clerk about options for lunch and he said that there was only one restaurant within walking distance (and that it had just been built – so I guess that was a good thing).  Our room was an accessible room, which gave us more room.  On the negative side, there was no way to keep the shower water from flooding the bathroom (towels were used as dams).  And for some reason, there were not enough plugs in this particular room.  We inquired about changing rooms but when we saw some of the other rooms (which would have been noisier), we decided to stay.

We walked in a light drizzle to the Walnut Tree Farm Restaurant. 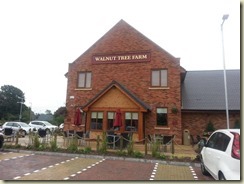 It was a nice, spacious, new eatery, which reminded me a little of the Cheesecake Factory.  The menu was huge but we settled on a salad and tuna sandwiches.  Of course, both dishes were a bit odd.  One of the more interesting things about the tuna sandwiches was the little symbol next to the item in the menu.  After inquiring and after some investigating, the waitress told us it was a warning that the sandwich might contain bones.  I have never run into any bones in tuna in my whole life but in the UK, the populace must be protected.

The food was OK and we took some of it home for dinner.

We walked a bit around the neighborhood near the restaurant but decided that it would not be an interesting trek – besides, the weather was still threatening rain.

The rest of the day was spent in the lobby reading.

We watched some strange British TV in our room in the evening.