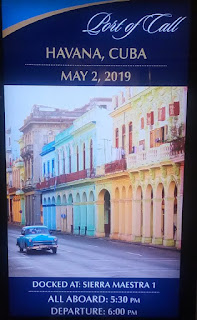 The room was quiet and the seas gentle - only a short hop to Havana from Miami.

It's a beautiful day in Havana - not a cloud in the sky and not too warm.

A nice breakfast up in the Terrace Café - they have all the usual fare - waffles and cottage cheese but, if you want pancakes, they make them for you on request. Overall, the breakfast was good although they open pretty late for me.

We are both on "A Walking Tour of Old Havana" today (nice to get an excursion at the first port).

The approach to Havana was similar in some ways to that in San Juan, Puerto Rico.  There is a fort near the entrance to the harbor and then a large bay and finally a terminal building.  The approach (including us) is shown in the sequence below. 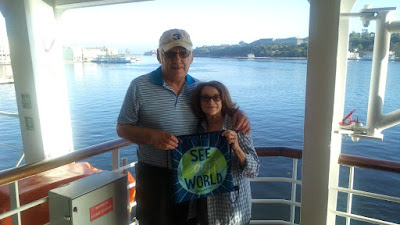 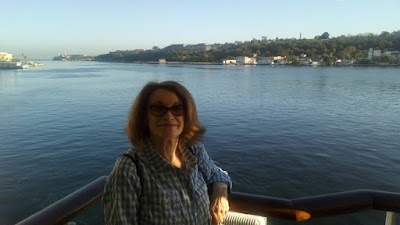 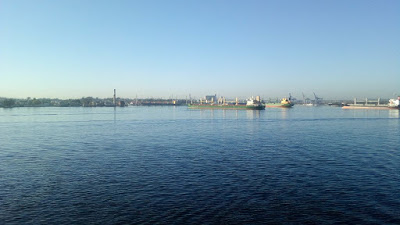 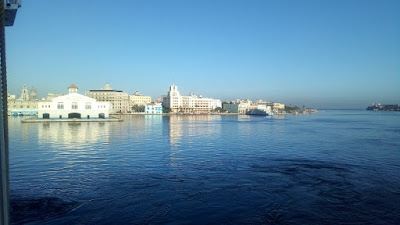 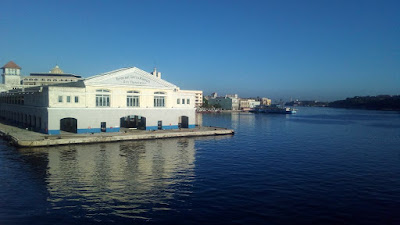 We will be docked at the Sierra Maestra Cruise Terminal.  The terminal building was still somewhat in disrepair - understandable since ships have not really been coming here on a regular basis.  We disembarked and met our group and guide, Lisa, in the terminal and then walked across the street to start our tour.  The map below shows where we walked. 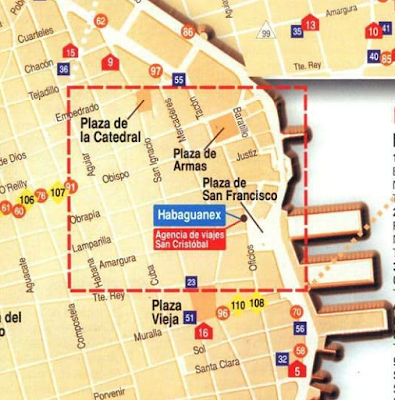 Our first stop was the Plaza de San Francisco, which was constructed in the 17th century to accommodate the ships docking at the harbor.  In 1730, Iglesia y Convento de San Francisco de Asis (Church and Convent of St Francis of Asisi) started construction and is still the main building in the square. 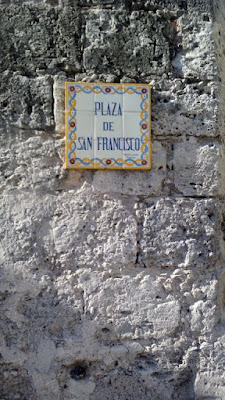 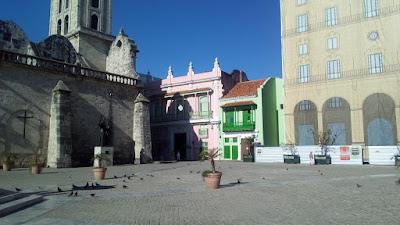 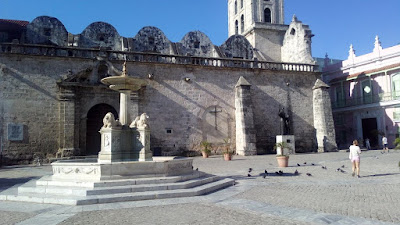 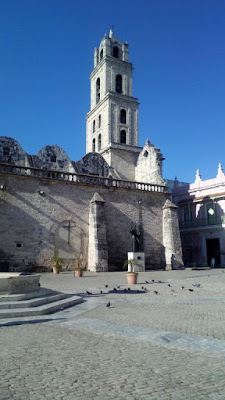 In the southeast corner of the plaza, the Fuente de Los Leones was sculpted in Carrera marble by an Italian artist in 1836. 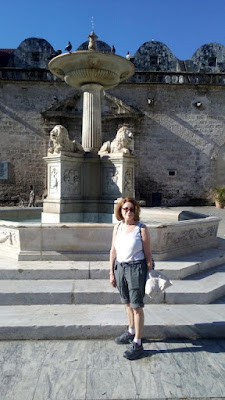 The tour's next stop, as we walked by and through narrow streets, 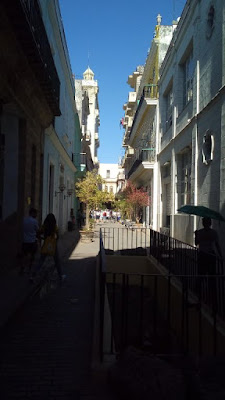 was the Plaza Vieja. 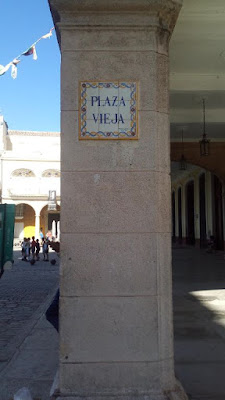 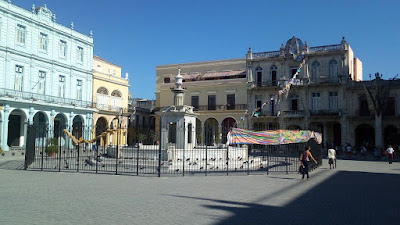 The plaza had some interesting features - the first was a metal installation of a tree and the second was a woman riding on a rooster while holding a fork.  The tree is self explanatory but the other statue is allegorical - it depicts a prostitute (the woman), the rooster (an American man she is pursuing), and the fork (the woman earning money to put food on the table).  Pretty big stretch but that's art.  BTW, Lisa, our guide, shown with the statue, did not give us that explanation of the sculpture. 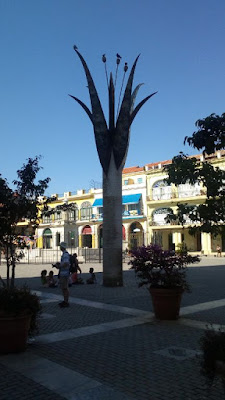 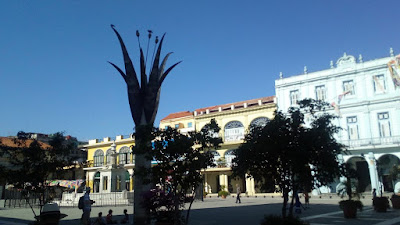 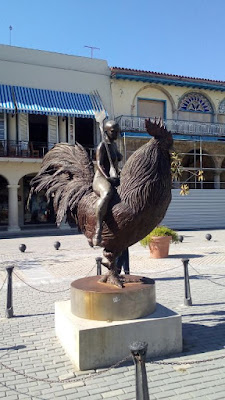 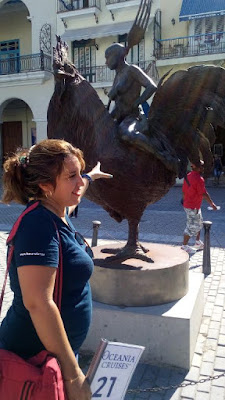 We passed by the Casa Gobierno in the Plaza de Armas.  We couldn't see much but I did spot a statue of Cristobal Colon in the courtyard. 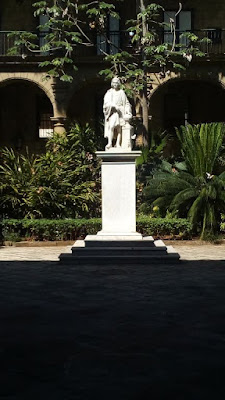 We saw the famous Catedral San Cristobal (Havana Cathedral), the resting place for Cristobal Colon's bones from 1796 to 1898 (they were moved from Santo Domingo, Hispanola). They were then transported to the Catedral de Sevilla, where they are today.  Part of the mystery of Columbus' final resting place. 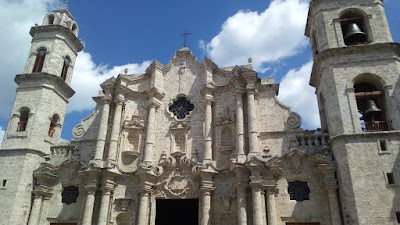 We continued to the Hotel Ambos Mundos and walked around the lobby.  The hotel is famous for the resident in Room 511, where Ernest Hemingway lived for seven years in the 1930s.  Today, the room is a mini-museum within the hotel. 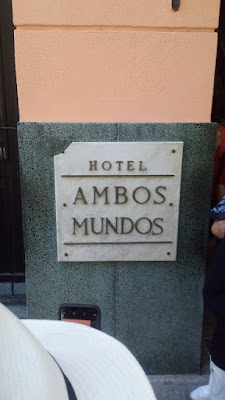 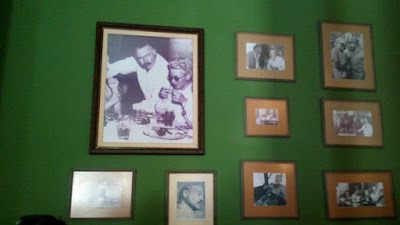 No trip to Havana would be complete without checking out the vintage American cars endemic to this city.  We found a whole row of them across the street from the Old City. 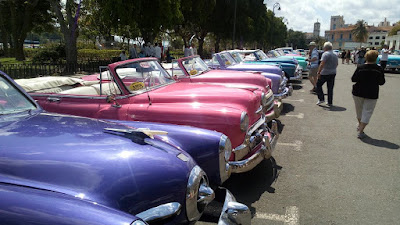 The tour turned out to be somewhat of a disappointment.  Instead of telling us about the sights of Old Havana, Lisa focused on the politics of Cuba, the plight of the people, the revolution, and related items.  They are important but we are tourists hoping to learn something from the perspective of a local.  Another time, if there is one, maybe.

We headed back to the Terminal Building and then to the ship.

We watched the sail away from Deck 5.  At least we can say that we visited Cuba and Old Havana. 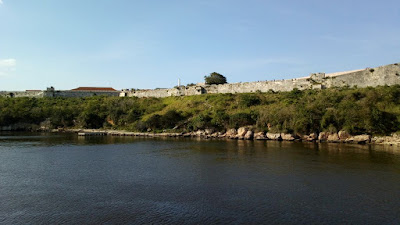 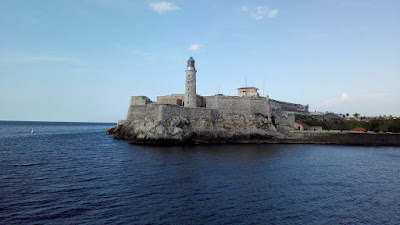