Ellen and I are both on the same tour today: “Pisa and Florence On Your Own”  (Amanda is my guide).  There is a lot of drive time on this tour – about 90 minutes to Pisa and three hours back from Firenze to La Spezia. 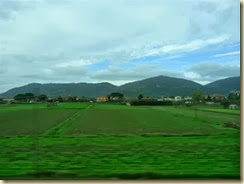 On our way to Pisa, the guide pointed out that the light areas on the nearby mountains are quarries for the much desired Carrera Marble.  Along the highway, there are numerous shops selling slabs of this marble.

Our bus parks a few blocks away from Miracle Square, where the major sites of Pisa are located.  I try to remember where the bus park is so I can lead any stragglers back to the bus at the end of the tour. 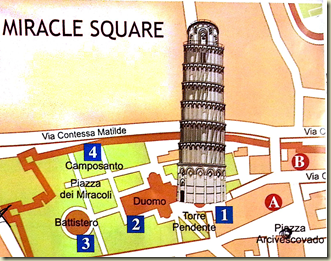 The first site to greet the group in Miracle Square is a Subway Sandwich Shop – complete with washroom facilities and free WiFi.  They are even wearing gloves during the preparation of their sandwiches.  Not only will I be able to catch up on emails but I will also be able to post some FB updates on the spot. 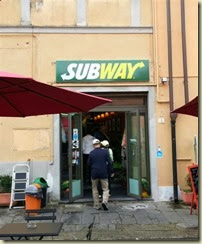 The Leaning Subway of Pisa

I am able to find Ellen pretty easily in the Square. 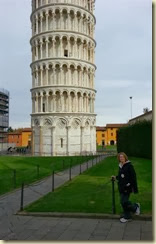 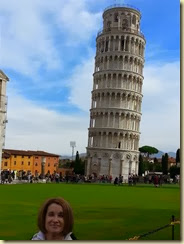 Ellen and the Tower of Pisa (leaning and non-leaning)

You can’t be in Pisa without taking a series of pictures of the tower.  We were told that the tower was secured by cables to the adjacent buildings but I couldn’t see any. 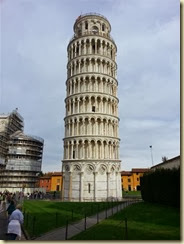 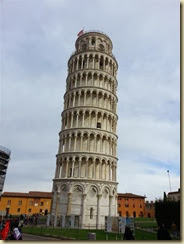 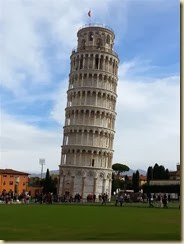 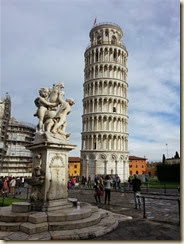 There are other buildings in Miracle Square.  One of them is the Duomo of Pisa – a massive Cathedral. 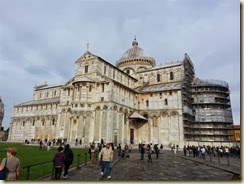 The other building in the Square is the Battistero of Pisa where Baptisms were carried out in the area. 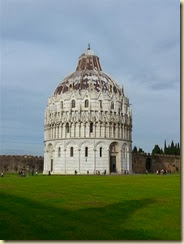 The departure time arrived and I checked around to make sure that everyone was headed back to the bus meeting point.  In the Subway, a number of guests were still using the bathrooms.  Another couple just had to have a Subway sandwich so they were not ready to go either.  As it turned out, I walked the four stragglers back to the bus – not a straight forward route but we did find the bus.

Our next stop would be Florence about an hour away.

The busses parked near “Holocaust Square” which was about five or six blocked from Piazza Santa Croce.

We had over two hours on our own in Florence. 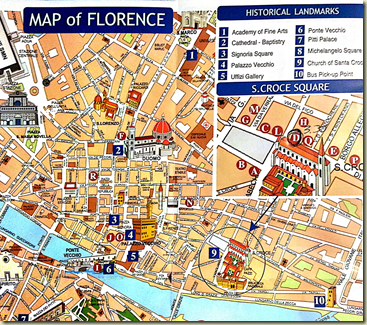 We walked about 8-10 blocks to visit the Synagoga Maggiore Firenze.  I took the picture below from across the street since the building had two armed soldiers guarding the entrance. 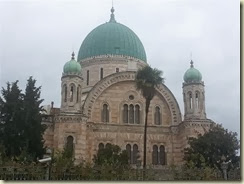 From there, we went back toward the Piazza Santa Croce to look for  a place for lunch.  We needed a reasonable place that also had WiFi.  We found it at Ristorante Il Teatro – a nice pizza and pasta place a few blocks from Santa Croce.  The place was packed because one of the ship’s tours included this place as their lunch stop – we figured it had to be OK to be part of an excursion.  We, as usual, over ordered – two pizzas (one Marguerita and one Vegetarian) –  we wound up eating up both of them.  I had my usual beer and it was good even on a cloudy cool day. 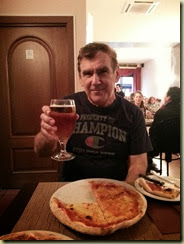 After lunch and catching up on our emails, we walked back to Santa Croce to see some of the sights. 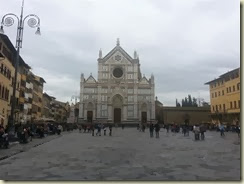 From Santa Croce, we made a return visit to the Palazzo Vecchio (old Palace) In the Piazza Signoria to see the statues that highlight the front of the structure. 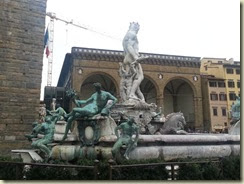 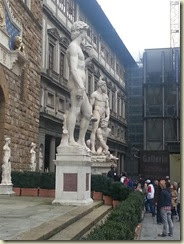 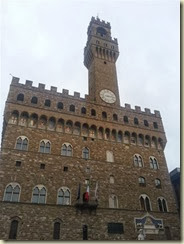 Our meeting place was the statue of Dante at the left corner of the Santa Croce church. 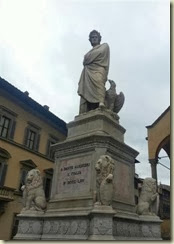 This is a good location for several reasons – there are free bathrooms at Michelangelo’s Leather Shop (and others in the area) and the Caffe Gelateria is right on the corner.  Even after two pizzas and a beer, some dessert sounds good. 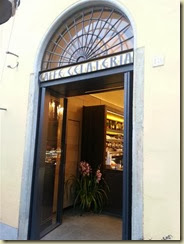 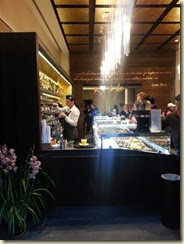 Everything is seriously yummy and the staff is all decked out in very spiffy uniforms but we settled on two custard filled donuts – each a Euro (that’s less than we would pay for a decent donut at Dunkin’s).  The pastries were absolutely delicious and documented below. 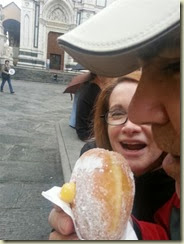 At the predetermined meeting time, we are still several passengers short.  Amanda asked my help is calling out the roll for those missing people.  Soon, we have everyone accounted for and we start our long walk back to the bus and our three hour ride to La Spezia.  We hadn’t gone a half block when one of our group started sprinting back to the meeting point – apparently, she had left her cell phone and camera in the bathroom at the leather store.  I yelled to Amanda (about a block away) to wait – fortunately, she heard me and the group stopped until the phone and camera were retrieved and everyone was back in the group.

The ride home was long and in the dark – I should have taken a nap but I met three nice women from New Jersey and we chatted most of the way home.

Dinner was in the Ocean View Cafe – and we did manage to catch the second show by Garin Bader in the Equinox Theater.  In this show, we would combine his piano skills with this magic skills (an unusual combination). 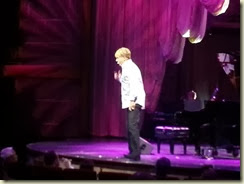 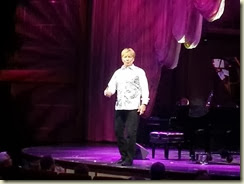 Besides some close up magic with cards, Garin also asked a volunteer from the audience to reach into a jar and pick out a name of a famous person.  Without knowing the name, Garin set about cutting out a paper doll of the person. 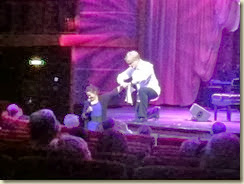 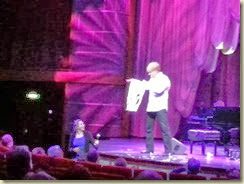 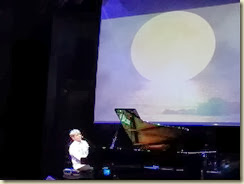 “My Heart Will Go On” mash-up with “Moonlight Sonata”

A long day on the road…but a very nice tour.