Let’s hop in the “Way-Back” Machine for a bit since I wanted to share and expand on previous posts (Einstein said it was OK). If some of these shots and thoughts were already posted, well, then enjoy them again…

Sometimes, when you are in such a beautiful environment – in this case, a great ship and wonderful vistas, you take some things for granted. This photo of the Mediterranean is one of those. The sea is calm, deep blue and endless – the biggest lake (you might say) that we have ever sailed on 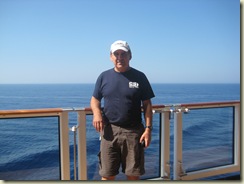 The Mediterranean from the Lawn Club

This beautiful Island, name for St. Irene, just had too many beautiful sites to share. However, I did forget one – a beautiful woman and a beautiful ship with the Santorini Caldera in the background 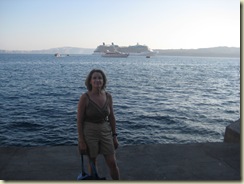 Ellen and the Solstice

Mykonos town is your typical quaint Greek harbor town complete with restaurants, internet cafes, and endless shops. It looks like, any minute, Zorba will pop up and start a Greek line dance. Instead of Zorba you get me (people used to say I looked like Anthony Quinn).

We visited Kusadasi as part of a business-pleasure trip about 12 years ago. We stayed in a nice 5 star hotel but we didn’t get a chance to see much of the city. This time around, we made a point of walking around the colorful harbor area. Since this is a resort town, there are more English speaking folks in the stores.

But in the harbor area itself there were two sites not mentioned earlier. The first is the hill near the water with an imposing statue of Turkey’s founder, Ataturk, staring down at the city to make sure all is OK 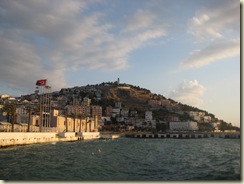 The second site is the tiny, island complete with fort (to protect the harbor) and home to a colony (correct word?) of pigeons. The birds are the source of the city’s name, Kusadasi (Bird Island).

This island now had a causeway connecting it to Kusadasi – 12 years ago, you needed a boat to get the island. Our guide told us that this is destined to become a Club Med in the near future. This will surely change the personality of Bird Island.

A few years ago, Chicago (where we live), had a promotion going involving Paper Mache cows. These cows, decorated in the most unusual ways, were all over the city. Apparently, a few of them bought air tickets and flew to Kusadasi, where they can now be seen in the pier restaurant area

Ellen and our ex-pat Chicago Cows

The vendors here are very low key unlike other destinations. This means you can actually walk down the streets and enjoy the ambience without being hassled. 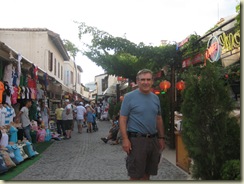 At the Kusadasi Shopping Area

You may have caught on to a theme here – namely to document that were actually at these locations.

Kusadasi also has very nice little beach areas. This particular one has a great view of our floating 5 star hotel – the Celebrity Solstice.

The Solstice in Kusadasi Harbor

A relaxing day at sea – a lot of beautiful Greek Islands – and my presentation today went well. The only thing that is needed to complete this great day is a relaxing dinner in the Grand Epernay Dining Room – complete with window seat. Mission accomplished. 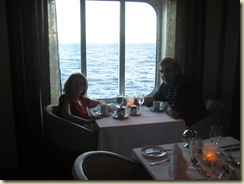 We now return you to our regular blogging…