Coast to Coast Through the Panama Canal 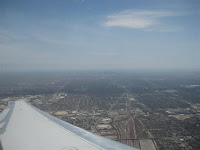 good, and we are all set for our 21 day cruise from Ft. Lauderdale
to Seattle through the Panama Canal. There are 11 sea days on this voyage so I've prepared 11 presentations (that would be a lot of speaking - almost a semester's worth of lectures). The climbout
over Chicago (especially the hard left bank) is always exciting...

Once settled in our hotel, we are off to have dinner with my 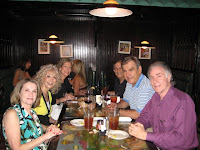 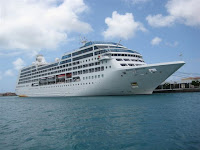 the beautiful Pacific Princess -
The "Love Boat" of TV fame is a cozy, elegant ship (more like a country mansion than a cruise ship) and with only 670 passengers a ship where you can meet nearly everyone on board. 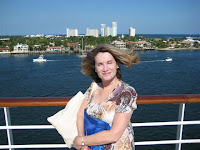 Ellen during the sailaway 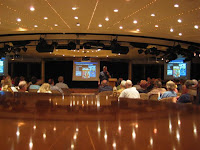 For a lecturer, sea days usually mean work - my first talk
"The CSI Phenomenon" drew over 100 attendees to the Cabaret
Lounge. The group was interactive and had good comments and
questions - the attendees were very loyal and attended all six of the lectures during the cruise. A perfect audience. 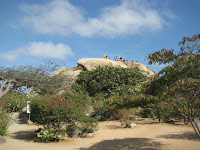 On tour today - We visit the Casibari Granite Rock Formation
(the top has great vistas), the California Lighthouse (named after
a sunken ship and not the state) and Palm Beach. 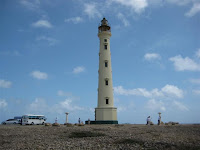 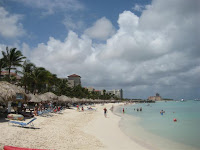 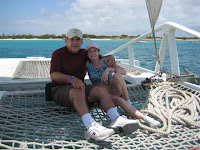 scheduled to return
us to the dock had engine trouble a few miles from shore - we needed a tow and a new boat - this time a catamaran (much more fun).

Ellen and me on the Cat

We are again on tour today ("The Best of Cartagena"). The 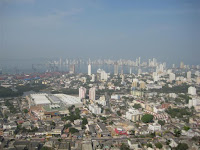 monastery, La Popa, stand atop a tall hill near the city and
affords terrific views of the city and the grounds are green and very colonial. The old city wall is even visible from this location. 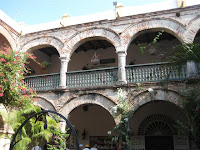 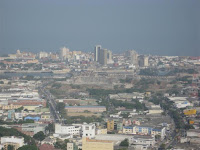 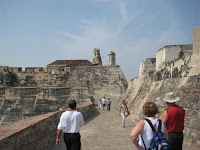 
Even though it is raining, this is the highlight of the trip - a multi-hour transit of the Panama Canal - through the three locks and into the lakes - note: The humidity was so high that condensation formed inside the lens of my camera giving everything a foggy look. I let it dry out in a warm place and the fog was gone 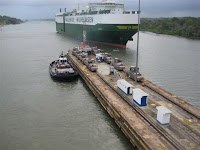 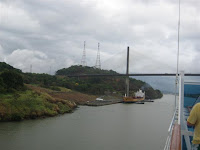 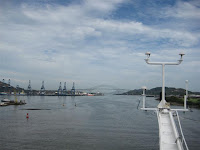 The ship anchored at Fuerte Amador (a small shopping port near Panama City) - we spent some time with Mark and Celia (from Napa, CA) and their friend, Sue (from Australia). Good Panamanian beer and good conversation on a steamy tropical night 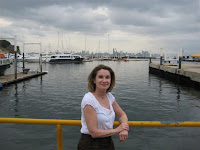 Ellen at the pier at Fuerte Amador, Panama

No tour today so we decided to check out the local vendors lining the beach at this small town (population 4,000) 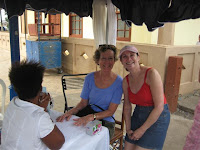 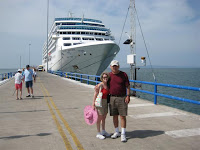 - besides Aruba
which is known for its winds, this stop was also a bit windy. The beach looked pretty nice and the locals were out in numbers.


Ellen and Marina at the Beachside salon

The Swine Flu Issue
During the early part of the cruise, all the buzz on board revolved around the swine flu pre-pandemic and all of the cases in Mexico. Rumors abounded about what the ship would do about our planned stops in Acapulco and Cabo San Lucas, Mexico. Well, eventually the company erred on the side of safety (as it should) and decided to drop both Mexican Ports. Instead, they added the port of San Juan Del Sur, Nicaragua. However, that also meant five straight sea days. OK with me...who needs the flu.
Sunday, May 3, 2009 - San Juan Del Sur, Nicaragua
We are on tour today and visiting a number of sites at this newly
added destination. One of the stops takes us to the town of Rivas for some sightseeing and R and R.

Sammie and Ellen trying to figure what this statue is

From Rivas, we visited a resort owned by former major league pitcher, Dennis Martinez (no doubt a local hero). The resort is on the shores of Lake Nicaragua. This Lake is pretty famous because in its center lies the island of Ometepe, which houses two volcanoes, Concepcion and Maderas. There is a move to make this island a modern wonder of the world (the guide wanted us to vote for it).
It's too hazy to see the volcanoes today 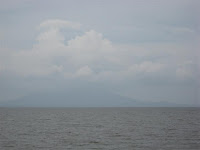 The big issue with this tour site is the tremendous number of flies that inhabit the resort and grounds - they form a carpet of flies on the ground and I can't even describe the washrooms.

We ask the driver to drop us off in the center of the town so we
can use the internet cafe to touch base with home - there weren't
many locals around and we walked back to the ship (a few blocks)
when we were done. We both felt very safe in this quaint little town.

Ellen staying in touch at the internet Cafe 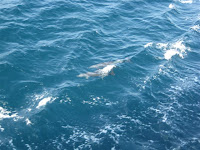 Did we get many pictures? No. It's similar to the situation with
UFOs - you never seem to have a decent camera or
camcorder handy.

Believe it or not, there are two dolphins in this picture
Tuesday, May 5, 2009 - Puerto Quetzal, Guatemala - 80F - Sunny
This is an interesting stop - we are docked at a very nice pier just across from a pretty big vendor complex - there are some indoor vendor but most of the proprietors are working outside.
The marina is very nice with upscale boats taking up the moorings 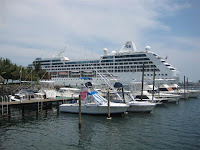 The Pacific Princess and the marina at Puerto Quetzal
As we walked around the complex, we took in a performance by
some local dancers
We were basically on the lookout for another internet Cafe but were told that there wasn't one but the bar by the marina had free WiFi - I do believe this is a step up from Panera or Corner Bakery. For the price of a great local beer, you can log into their WiFi (which is very quick) and nobody even pays any attention to you - not even to ask you to pay. 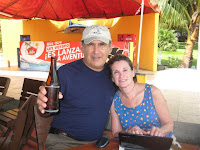 That's exactly what we did for a good hour plus - a little e-mailing, some electronic banking and a good beer - this is what exotic locations are all about. Very friendly locals.

Five straight sea days - they were great - very relaxing although the seas were a bit rough. We played a lot of trivia with Mark, Celia, and Sue (even won ocassionally) and another new friend, Suzanne (an actress from LA).

Sat out on the deck and just watched the waves go by. Sea days are lectures days, so I presented additional forensic lectures (people really seemed to like the Cold Case lecture). These consecutive sea days were good practice for our Transatlantic Cruise in December.

Most of the passengers couldn't wait to get off the ship and get on dry land that doesn't move (actually the ground in San Fransisco has been known to move quite a bit).

Even though we used to live in the Bay Area, we decided to take a tour (it's been a while since we have been here and we never got to the City that often)